Singlaub gets award for standing up to Carter

Singlaub gets award for standing up to Carter 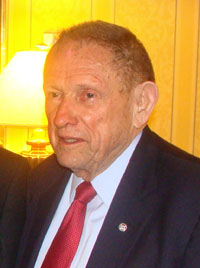 Retired U.S. Army Major General John K. Singlaub, a Korean War veteran, was named Thursday in Washington the fourth recipient of the Paik Sun-yup Award for his contributions to the U.S.-Korea alliance.

Singlaub, 95, was chief of staff of the U.S. Forces in South Korea and the United Nations Command and is a founding member of the Central Intelligence Agency and served in its predecessor, the Office of Strategic Services during World War II.

The Ministry of National Defense started the award, sponsored by the JoongAng Ilbo, in 2013 to honor an American who contributed to the development of the U.S.-Korea alliance.

U.S. President Jimmy Carter in 1977 removed Singlaub as U.S. chief of staff in Korea for telling the Washington Post that the commander-in-chief’s plan to withdraw U.S. troops from Korea within the next five years is a mistake that “will lead to war.”

In the May 19, 1977 article, Singlaub said the withdrawal would encourage then-North Korean leader Kim Il Sung to attack.

He justified his reasoning by citing the USFK’s intelligence assessment that North Korea’s military capabilities were much stronger than generally thought. He voiced a deep concern that Washington was making decisions based on “information that’s two or three years old.”

Singlaub told the JoongAng Ilbo over the phone, “I felt that I did the right thing both for the Koreans, for the Republic of Korea, and for my own country.”

He added that at the time, he feared a repeat of 1949, when the U.S. pulled its troops out of the Korean Peninsula and the following year, North Korea attacked. “We didn’t need another war,” he said.

“I considered that if Jimmy Carter was making decisions like that, someone had to tell him why it was wrong,” said Singlaub.

When he was summoned back to Washington, he said many people told him to claim that the article had misquoted him. “I was very accurately quoted, and I told the president that,” he recalled. “And that didn’t make him very happy.”

Eventually, the order for the withdrawal of U.S. troops was canceled.

“I think that is wrong,” said Singlaub. “The fact is that the South Koreans are spending a great deal of money to help us with our troop presence in Korea. And they’re paying good money to the United States for the equipment that they buy from us. So I don’t think the candidate Trump fully understands the situation there… And I’m prepared to tell him that.”

He added, “I think we should have a long-lasting partnership where the North Koreans and the Chinese understand that an attack on South Korea is the same thing as making an attack on the United States.”

He currently lives with his wife Joan in Franklin, Tennessee.

His doctor recommended he not fly to Washington to attend the award ceremony. It was attended by military personnel of both countries including Korean Minister of National Defense Han Min-koo and former commanders of the U.S. Forces Korea.

“I’m deeply honored,” said Singlaub about receiving the award. “I don’t know if I deserve it. There are so many others that contributed to the current situation in Korea. I’m just one of many Americans who’s spent a lot of my life doing that.

Former recipients were the late Gen. Walton Walker, Col. William Webber, and the late Gen. James Van Fleet, a commander of the U.S. 8th Army during the Korean War.