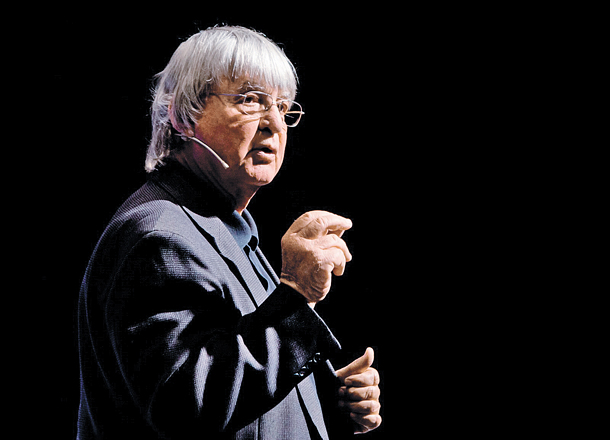 Is the human race stepping closer to disasters depicted in climate science fiction-movies like “The Day After Tomorrow”?

Jim Dator, professor and director emeritus of the Hawaii Research Center for Futures Studies, says the scenario is highly likely. “The forces and factors that worked for Korea and the world for the past 50 years will work no more,” he says.

The 83-year-old futurist, who has worked in futures studies for nearly half a century, shared his thoughts on the future of Korea. After his first visit to South Korea in 1982 and many visits since, he has been interested in the political and economic futures of the country.

The Anthropocene, climate change, rising sea levels, global warming, food, water and energy challenges are key issues the world is facing, Dator warned. The so-called Anthropocene refers to an epoch created by significant global impact on the Earth’s geology and ecosystem caused by human activities. “Continued economic growth with more jobs and more products should no longer be the main goal of Korea, or any country. 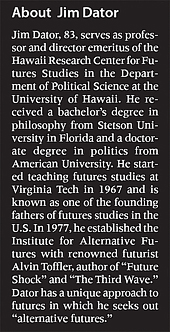 “There are new and more powerful forces at work, in part caused by the pursuit of continued economic growth, that have created the Anthropocene Epoch with its new challenges and opportunities,” he said.

Korea, which has had rapid economic growth since the 1950s, is not exempt from the challenges faced by the world. Dator maintains “no one can predict the future,” but he has shared his insights on one of his likely scenarios to be laid out in the future.

A. No one, certainly not I, can predict what the future will be, [but] substantial environmental change seems highly likely to me. It should be viewed as a new opportunity. If not, it will indeed become a catastrophe.

Also, factors of the Anthropocene have and increasingly will disrupt the political-economic forces of neoliberal globalism. We will be forced to produce and consume locally, and so should prepare for it.

If AI continues development, there will be no new jobs and so policies supporting peaceful and abundant full unemployment are necessary.

If challenges like climate change and global warming dominate, as I think they might, [and] humans allow catastrophe to unfold, then AI deserves to take over!

Where do you see Korea in that picture?

Within 50 years, Korea transformed from being one of the poorest countries in the world to becoming one of the richest. It therefore has shown it is able to change quickly and successfully to new conditions. The question is: Will Korea lead, or wait until others define the responses?

I hope Korea will lead, since no other nations show any ability better than Korea. Korea has enormously intelligent and hardworking people who are able to assume global leadership in this new world, if they choose to do so.

It seems you have high regard for Korean talent.

Korea has invested a great deal in its human resources. It has a very highly educated population. Koreans still are relatively disciplined, and hardworking. Thus, Koreans should be able to understand the need to shift focus in the Anthropocene epoch, and become world leaders.

Where should these talents devote their time?

How about industry players?

Businesses, new and old, will need to anticipate and respond to those changes soon and quickly. Industries may revive in different ways but they will either adapt to the needs of the Anthropocene epoch, or die.

Also, the world appears to be retreating from economic globalism to local sufficiency. The skills required to live and thrive peacefully and creatively on local resources are needed.

Companies have been showing effort through developing sustainable energy sources and biotechnology. Wouldn’t that be enough?

Those efforts are meaningful, but too late to avoid great disruption. We should have made the shift to sustainable energy sources long ago. It takes time to shift from oil to other sources, and it takes energy to produce energy. Oil was a fantastic cheap and plentiful source that produced more energy than it consumed. There is nothing now or on the horizon that can equal oil, fracking, deep sea exploitation. All the rest consume more energy than they produce and/or cost more than consumers can pay. The same is true of solar, wind, wave, geothermal, and all the rest. They are net energy consumers, not producers, and they are neither networked nor multifunctional, like oil used to be.

If you say it’s too late, where does futures studies stand?

It is not possible to predict the future. It is possible to forecast alternative futures and to envision and design preferred futures. There are many profoundly alternative futures ahead, and so I chose to emphasize one of them to form my answers. Futures studies helps people, communities, and institutions envision and move towards their preferred futures.

How did you enter futures studies?

I have always been interested in the reasons for social change, and wanted to know what came after “development,” after countries “caught up” with advanced nations, since development theory did not discuss its own future, implying that history somehow ended once a country was “developed” and would experience no further significant change. That seemed wrong to me, and so I began to study the futures of all societies seriously, and joined with other futurists who were also doing so for the first time then.

Is there a special routine that helps you with the projection?

I read many papers, scan many websites and communicate with other futurists all over the world every day to look for, first, the patterns and second, novelties.

No one can predict the future. Neither can I. But if some substantial number of Koreans do not prepare for these changes, the future may not be too bright. If the future turns out differently, then no harm will have been done in preparing for the one I discuss.


If we act as if it matters

And it doesn’t matter,

But if we act as if it doesn’t matter