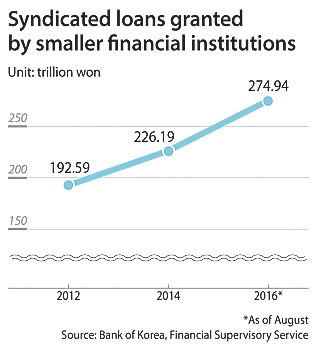 The government’s tightening of mortgage loans in hopes of curbing household debt has spread to small financial institutions such as savings banks.

The Financial Supervisory Service (FSS) recently told the National Credit Union Federation of Korea not to increase the value of syndicated loans more than 10 percent over the ones granted the previous month.

Syndicated loans are offered to groups of borrowers buying a number of housing units within the same apartment complex. This is a common practice in the Korean real estate market as the financial institution can secure a large group of clients without much difficulty while the homebuyers can obtain a loan whose interest rate is relatively lower than individual mortgages.

The loans, however, are seen contributing to the sharp increase of overall household debt in the country.

The real estate market recently began to see a sharp recovery as reconstructed apartments in Gangnam district, southeastern Seoul, that were shelved for nearly a decade were finally given the green light by the government.

Such positive sentiments started to spread to other projects particularly centered in Seoul and neighboringGyeonggi province and many considered this to be their last chance to buy apartments in metropolitan Seoul.

But as concerns over the rapid growth of household debt have risen, the government has started to tighten loans in the banking industry and recently started to make similar moves in the nonbanking financial industry. The FSS already has pushed major financial institutions to limit the amount of syndicated loans starting the second half of this year, which has sent borrowers to smaller banks.

“If the current situation continues by the end of the year there won’t be any syndicated loan deals [available],” said an industry insider.

National Credit Union Federation of Korea gave out 20 billion won ($17.5 million) in syndicated loans in August but just 2.9 billion won last month. The bank has not approved any this month, as of Friday.

Nonghyup gave only 59.5 billion won in loans to a group this month and Suhyup granted a low 10 billion won.

According to the Bank of Korea, the amount of household loans, including syndicated loans, rose from 248.63 trillion won at the end of last year to 274.94 trillion won in August. Qualifications for loans at small financial institutions have been relatively looser than major banks’

“It is necessary to regulate syndicate loans as the United States [Federal Reserve] is expected to raise their key interest rates later this year,” said Kang Kyung-hoon, a business professor at Dongkuk University. “This might have an impact on local interest rates.”

The Bank of Korea has kept the nation’s benchmark interest rate at 1.25 percent. But a hike of the U.S. interest rate might force Korea’s central bank to raise rates.

Kang noted that the government should maintain qualifications and interest rates regarding the real estate market as frequent changes only bring confusion. The government has released numerous policies including easing loan regulations in hopes of boosting the real estate market. However, the recent shift to tighten loans was criticized for confusing homebuyers and financial companies.

“The overall economy will contract if new apartment availability shrinks as a result of tighter regulation against syndicated loans,” said Shim Kyo-un, a Konkuk University professor of real estate studies. “As a result it will be more difficult for middle- and lower income households to buy homes.”