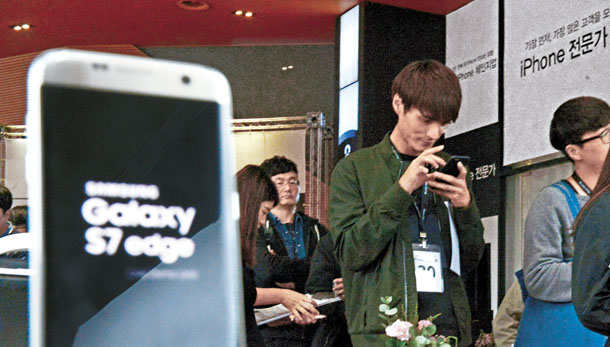 Galaxy S7 Edge smartphone by Samsung Electronics is displayed as crowds line up to receive preordered iPhone 7s on Friday, the official launch day of the phone in Korea, at the KT Square building located in Gwanghwamun, central Seoul. [NEWSIS]

Samsung Electronics is offering 50 percent discounts to former Galaxy Note7 users who switch to the Galaxy S7 smartphone or its cousin the Galaxy S7 Edge and ultimately upgrade to the upcoming S8 or Note8 next year.

Under the so-called “Galaxy upgrade program,” customers who are still using the inflammable phablet or those who replaced it with a Galaxy S7 or S7 Edge after Oct. 11, when Samsung was forced to discontinue the model, are instructed to visit a phone store and cancel their telecom subscription.

They should sign a new 24-month contract for either the S7 or S7 Edge. When Samsung releases the Galaxy S8 in March 2017 and the Note8 in September, the customers can switch to the new models without having to pay 12 months of the balance for the S7 or S7 Edge. They will have to pay the full price for the S8 or Note8.

The program is meant to encourage loyal Note7 users to turn in the faulty model - and to lock in customers to the new Samsung phones in advance.

Samsung is trying to prevent defections to Apple’s new iPhone 7, which has been enjoying better-than-expected sales since its launch last Friday.

“We have devised the upgrade program to ease burdens for the customers purchasing the next Samsung flagship smartphone models for next year,” said a Samsung spokesman. “As the Korean Agency for Technology and Standards has recommended, Note7 users are advised to have their phones replaced for safety’s sake.”

Note7 customers joining the program, slated to last until Nov. 30, will also be eligible for other benefits such as 30,000 won ($26.51) worth of mobile vouchers for use on the Samsung online mall and a discount of 70,000 won on one month’s phone bill. Samsung is also providing 50 percent discounts on fees for repairing the screen on two different occasions.

An earlier-than-scheduled release of the Galaxy S8 seems far from feasible. Samsung executives have delayed the development of the model by two weeks as engineers try to figure out the Note7’s overheating problem, according to the Wall Street Journal, citing a member of the Galaxy S8 development team.