Lotte’s chairman proposes overhaul to how group is led

Lotte’s chairman proposes overhaul to how group is led 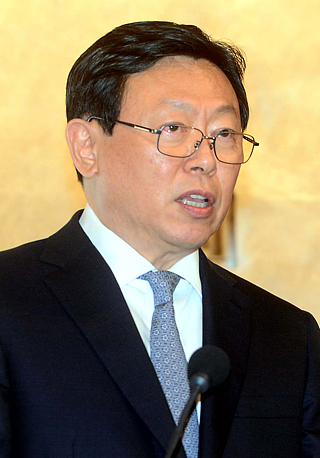 “Our focus has been centered too much on external growth and we were short of being socially responsible,” Chairman Shin Dong-bin said at the Lotte Hotel, Sogong-dong, central Seoul. “We will shift our focus to establishing a transparent corporate governance structure and completely solve the issue of our cross-holdings.”

While the company earlier set a goal of reaching 200 trillion won ($176.4 billion) in revenue by 2020, it will drop that target and dedicate more resources and energy to employee benefits and social responsibility programs.

The overhaul includes setting up a compliance committee and listing Hotel Lotte on the stock market, which will be accompanied by a simplifying of the corporate structure by reducing cross-shareholdings among affiliates.

The new compliance committee, a permanent body under the Lotte Chairman, will play a key role in improving the corporate culture and management practices. The committee will map out corporate policies to improve the integrity of management and oversee implementation of the policies in all subsidiaries.

“The committee will be comprised mainly of outside legal experts so it can have a practical impact,” a company spokesperson said.

Lotte Corporate Headquarters, a corporate body frequently referred to as the brain of Chairman Shin and encompassing seven departments, including the group secretariat, human resources management team and the Lotte Strategy & Insight Center, will be downsized. The Lotte Corporate Headquarters was the first target of search and seizure operations by prosecutors investigating the group. Currently there are about 300 workers on its team.

In line with organizational changes, the company will resume an abandoned initial public offering (IPO) for Hotel Lotte as soon as possible.

“By opening up the company’s businesses to investors at home and abroad, we will diversify the composition of our shareholders and lay a foundation to become a global company,” Shin said.

Listing Hotel Lotte, the de-facto holding company of Lotte’s Korean operations, is a major task for Shin to restore Lotte’s image and also help him secure control over Lotte in Korea. Currently, 99 percent of company shares are held by Japanese shareholders, including Lotte Holdings, Tokyo-based holding company of the group, and the affiliated L Investment.

“The listing of Hotel Lotte could save it from criticism that it is a subsidiary of Lotte Group’s Japanese headquarters and also strengthen Shin’s control over Korean headquarters as Shin leads corporate governance restructuring,” said Lee Sang-heon, an analyst from Hi Investment & Securities.

According to sources, the shares held by Japanese shareholders could be reduced to below 60 percent if Hotel Lotte goes public.

Moreover, the cash raised from new stakeholders in the IPO can be used to fund its hotels and duty-free business.

“We will put most of our efforts into discussing the indictment and trial proceedings with IPO-related institutions to pursue the listing of Hotel Lotte as scheduled,” the company said in a statement Tuesday.

Before proposing overhaul measures at the briefing, Chairman Shin and heads of Lotte’s 23 affiliates bowed in apology for the troubles caused over the past year.