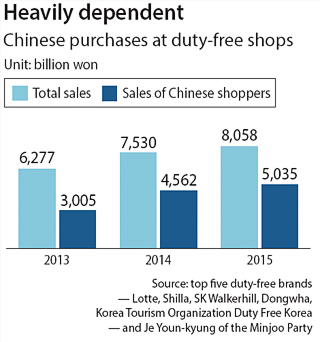 The Chinese government’s forced reduction of tourists visiting Korea by 20 percent is already dealing a blow to businesses.

“Even today, tourism offices in several provincial governments are acknowledging they are lowering the numbers of tourists going to Korea,” said an insider working in China’s tourism industry on Tuesday. “In several areas, there were even orders to send visitors to the Philippines instead of Korea.”

Relations between China and the Philippines, which were sour for some time due to a territorial dispute in the South China Sea, recently softened after President Rodrigo Duterte visited China last week.

Seoul’s ties with China have gotten frostier after it decided to deploy a U.S. missile defense shield that Beijing opposes.

Businesses that rely on Chinese visitors are worrying that the decision will hit them hard. It hasn’t been long since they overcame the aftermath of last year’s Middle East respiratory syndrome (MERS).

According to the Korea Tourism Organization, 2.4 million Chinese tourists came on group tours last year, 41 percent of the total number of Chinese tourists to Korea, which was approximately 6 million. As group tours are organized two to three months before departure, the decline is expected to really show by year’s end.

“If Chinese group tours fall by 20 percent, the annual loss in relevant industries may reach a minimum of 2 trillion won,” said researcher Shen Jia at the LG Economic Research Institute. “If the decline spreads to individual tourists, the economic damage will deepen even further.”

Through September of this year, Chinese tourists spent 3 trillion won at Lotte Department Stores. As soon as the news of the cutback spread Tuesday, duty-free stores organized emergency meetings with Chinese partners to devise some kind of a backup plan.

There are currently nine duty-free shops in Seoul, with four more waiting to open next year. Competition in the duty-free industry is fierce, as it is one of the most robust retail markets in Korea. “A sudden drop in Chinese shoppers will cause considerable impact to both current and future duty-free operators,” said a spokesperson for Shilla Duty Free.

Mid-priced hotels are nervous too. They are popular with group tours. “Half of the guests at business hotels in Myeong-dong or Dongdaemun are Chinese, and most are from group tours,” said Park Jong-mo, manager of the Ramada Hotel and Suites Seoul Namdaemun. “The market supply is rising, with new mid- and low-priced hotels being built in the city center. We’ll be seeing more vacant rooms.”