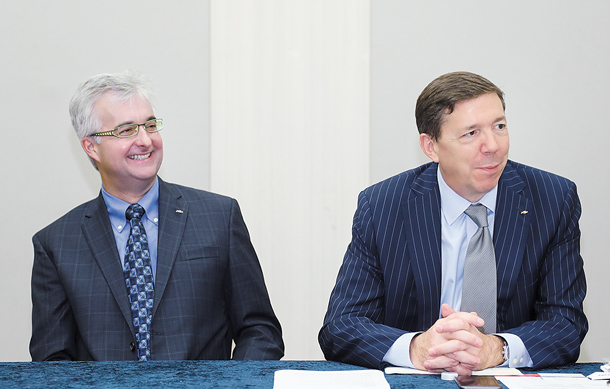 Chevrolet’s new Bolt EV, a subcompact fully-electric car, will “take the electric vehicle driving experience to the next level,” according to Lowell C. Paddock, a vice president of General Motors’ planning & program management.

The new EV is scheduled to go on sale in Korea by the first half of next year.

Paddock and other GM executives visited Seoul on Wendesday to participate in the Korea Electronics Show at COEX.

“Bolt EV is a game-changer, first because it drives the range of nearly 400 kilometers (248 miles), which will fundamentally change how people interact with EVs,” Paddock said.

The Bolt EV, which can travel 383 kilometers on one full charge, goes the longest distance among other competitors in Korea. It is the only electric car that allows travel from Seoul to Busan without having to worry about charging.

Its rivals in Korea, such as BMW’s i3, can travel 132 kilometers, and Hyundai Motor’s Ioniq travels 191 kilometers. However, long distance is not the only merit of the Bolt EV, GM said. “Part of the approach is to let people experience the vehicle as if they are driving a sports car,” said Paddock.

Martin J. Murray, who is in charge of the engineering, said the Bolt EV is “more powerful than any other EVs in the same segment,” and has a motor power of 150 kilowatts while the other rivals’ range from 80 to 120. “It will give the most unique feeling of all EVs, with its power and silent driving,” he added.

However, the lack of charging stations in Korea was a challenge for GM to expand.

“That is why we partnered up with Posco to help us through the infrastructure strategy,” said Dale Sullivan, vice president of vehicle sales, service and marketing for GM Korea.

“We are going to put infrastructure by ourselves, both through dealer agents and aftersales. We are also in talks with the government. There are also strategic parts in Korea such as Jeju Island that we will concentrate a little more in the first 24 months or so,” he said.

“Where I came from in California, we didn’t have infrastructure at first either. But through partnerships with many [original equipment manufacturers], you are going to see it.”

EVs are a small portion of Korea’s auto market but with the impending launch of Tesla Motors by the end of this year and continuous investment in the green-car sector by homegrown carmakers, the industry is poised to get more competitive. GM said it is welcoming the competition.

“It is going to help all of us improve the sales potential of the vehicles and raise awareness about environmentally-friendly cars.”
The domestic sales price hasn’t been released. Its U.S. price is an estimated $37,500 before tax incentives.