Inside the R&D center of CJ Korea Express

Inside the R&D center of CJ Korea Express 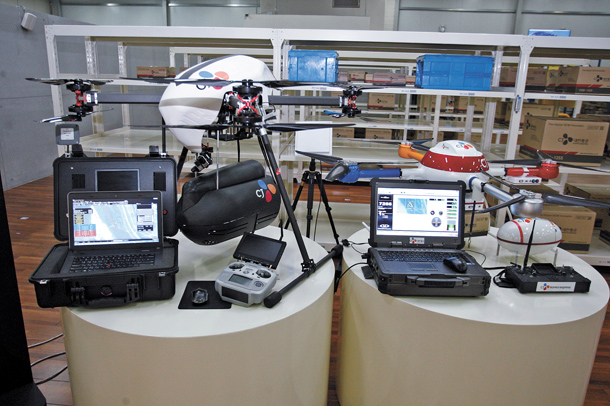 GUNPO, Gyeonggi — CJ Korea Express, the nation’s top logistics and delivery company, unveiled its bid to catch up to global giants like Amazon and DHL by developing new automated technology to improve supply chain management, at its futuristic research center at the Korea Integrated Freight Terminal in this small city just south of Seoul on Thursday.

Inside what the company calls the TES Innovation Center, a large robot resembling a giant vacuum cleaner is under development to maximize efficiency in the warehouse. The robot can currently carry loads of up to 500 kilograms (1,100 pounds) at 1 meter (3 feet) per second, and the company hopes to be able to put it to work in warehouses by 2018.

“More automation in warehouses greatly enhances the efficiency of work processes and also reduces the chances of errors,” a company spokesperson said.

The machine is meant to aid a human partner. Whenever it moves to a product that needs to be loaded, a staff member follows and loads the cargo onto the robot. To prevent possible collisions, safety sensors are attached to the machine to recognize obstacles and stop its operation when it runs into the obstacles.

“Logistics has often been perceived as a 3D [dirty, dangerous and demeaning] job, but this center is a test-bed to make the industry a new leader in the fourth industrial revolution,” said Richard Shin, executive vice president at the company.

Another big project at the center, dubbed “CJ Sky-Door,” is to develop drones for deliveries. The company currently has three drones in development and considers the project “necessary” in preparing for any changes that might disrupt the logistics industry. Amazon since 2013 has tossed around the idea of Amazon Prime Air, a delivery service using drones.

“Robots, automation, the Internet of Things, big data — these are all the next big keywords in the logistics industry,” said Kwon Koo-po, a research fellow on the future tech research team at CJ Korea Express.

Other companies have adopted technology developed by CJ to streamline the workflow at their logistics centers. Ebay implemented CJ’s smart packaging system that automates processes such as box assembly, taping and packing, which has contributed to cutting production cost.

At some of its own logistics centers, CJ has put in place various systems to automate packaging and speed up scanning.