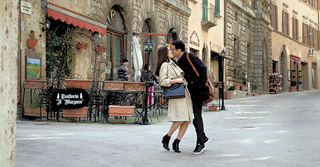 Min-gu, played by Kim Seung-woo, and Min-ha, played by Lee Tae-ran, used to love each other. 13 years ago, as a young couple in their twenties, the two shared everything together, cherishing each other more than anything else they had.

In spite of their dreamy days, their relationship did not last forever. The two parted for petty reasons, but have kept each other inside their hearts ever since.

On a breezy day in Italy, Min-gu and Min-ha magically run into each other. Their eyes meet for the first time in years, and what started out as a business trip turns into a week-long romantic voyage.

The story of running into one’s first love in an exotic city is as romantic as it can be. However, keeping in mind that the two are already married, with their own children, the story is also viewed as nothing more than irresponsible adultery.

For those who would like to immerse themselves in the romance blooming in Europe, “Twenty Again” welcomes viewers with its emotional story line.

Texas brothers Toby and Tanner, played by Chris Pine and Ben Foster, stand on the edge of the cliff with loads of debt on their shoulders. To make matters worse, the bank threatens to foreclose what’s left of their assets - the family land that their mother bequeathed to them.

Hopeless, the brothers, who had been living apart for years, reunite to save their family from being dragged deeper into hell. Their scheme is to rob branches of the bank that’s threatening to take away their land.

Victory seems to be on their side when Toby, a very calm and rational man, and Tanner, who’s ready to anything for his brother, succeed in robbing the banks. But this is until Texas Ranger Marcus, played by Jeff Bridges, starts to chase after them.

Reviewed as “the best film of 2016 so far” by Forbes, and recognized as “a mesmerizing, modern-day western that moves with the coiled intensity of a rattlesnake ready to spring” by the Wall Street Journal, the film has received rave reviews from critics and the media.

The splendid cast is also getting much attention, with David Mackenzie, the director, praising Chris Pine for his full understanding of his character Toby. Ben Foster has also been praised for his portrayal of his tough, rebellious character. 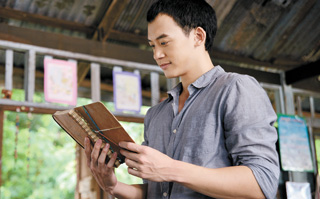 Song, played by Sukrit Wisetkaew, is a new teacher at a school in a remote village. The village is so small that his class only has four students, who Song gets close with.

With his bright energy and kind smiles, Song gradually changes the shy children into motivated students.

One day, while looking around the classroom, Song finds a diary written by Ann, a previous teacher, played by Laila Boonyasak, which tells stories of the nervous feelings she had on her first day as a teacher. Having had similar experiences, Song becomes absorbed into reading the diary.

Mesmerized by the truthful stories of an unknown woman, he becomes more and more curious about Ann, and slowly falls in love with a woman he had never met before. A part of him already feels as though Ann is a good friend of his, and Song eventually wishes to meet Ann in person one day.

A year later, Ann comes back to teach at the school, but this is only after Song had already left.

Surprised at how energetic and ambitious the students have become, Ann also becomes curious about Song. Just like how Song secretly fell in love with her, Ann goes through a similar process after reading his diary.

The story unravels peacefully, at a calming yet emotional pace.

The Triplets of Belleville (12)

This animated film, nominated for two Academy Awards - Best Animated Feature and Best Original Song - is coming to theaters in Korea for the first time. The novel technique used to animate the characters and the city of Belleville astonished viewers and critics at the time of its release in 2003.

The film unravels around Madame Souza, an old woman who lives with her young grandson, Champion. Champion lost his parents, and still reels from sadness. To cheer him up, Souza gets him a dog named Bruno, but the joy of having a new friend does not last long for Champion, who soon falls into a depression again. But when Souza gets him a new tricycle, he spends days and days practicing, motivated to become better. After years of training, he becomes a professional cyclist, ready to compete in the Tour de France.

During the race, however, three riders including Champion get kidnapped by a group of gangsters to Belleville, and Souza sets out with Bruno to get her grandson back.

In Belleville, Souza meets with the Belleville triplets, music hall singers who flourished in the 1930s. Spending time together, they become close, and Souza ends up becoming a part of their group. Will Souza ever be able to find her grandson? 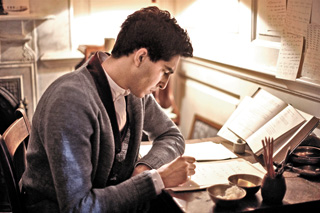 The Man Who Knew Infinity (12)

Based on a true story, “The Man Who Knew Infinity” tells the story of friendship based on the fervor for mathematics. Srinivasa Ramanujan, played by Dev Patel, is a math genius living in a poor village in India. Leaving his family, his beloved, and almost everything else he had back home, Ramanujan leaves for Trinity College, Cambridge, to work out the many mathematical discoveries he’s made inside his head. Although his journey begins as a hopeful challenge to the current mathematical world, he is ignored and disregarded in Britain for his different looks and ethnicity.

Professor Hardy, played by Jeremy Irons, however, recognizes his brilliance and fights with Ramanujan against the prejudice and haughtiness of others he has to suffer from. Although the two have totally different religious views, ethnic backgrounds, and even personalities, Hardy and Ramanujan work as a team to realize what the rest of the world believed was impossible. 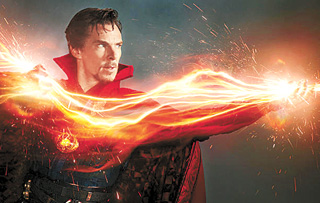 A new hero with unprecedented powers is joining the Marvel universe.

Doctor Strange, played by Benedict Cumberbatch, is a gifted doctor, but after an unforeseen car accident, loses his ability to use his hands. Deeply depressed by the sudden change in his life, Strange tries anything to put his damaged hands back together, but without much success. As his last hope in search of a cure, he sets out for Nepal, where he gets the chance to live a completely different life.

The Ancient One, played by Tilda Swinton, unravels a whole new world of spiritual power in front of Strange, bringing him from a quiet temple to the snowy mountains in less than a minute. She trains him to gain powers to do unimaginable things, and in the process, Strange finds out that there exists a number of dimensions, and that evil villains await on the other side. The villains try to break the barriers between the different dimensions, which would bring a disastrous end to the world.

Will Doctor Strange successfully carry out his duties to gloriously join the Marvel heroes?

Benedict Cumberbatch is a much-loved actor, known by many around the world as Detective Holmes from his role in the BBC crime drama “Sherlock.”