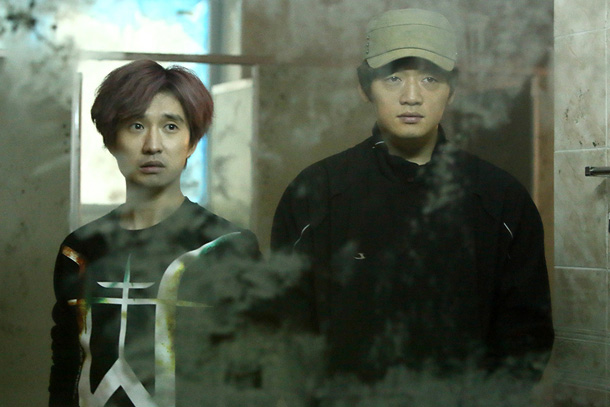 The horror flick “Hide-And-Never Seek,” released on Wednesday, is the closest to a proper Halloween film in local theaters this year. It revolves around an online show host, left, and his program’s producer. [PRAIN GLOBAL]

With Halloween just around the corner, theaters in North America are filled with spooky films such as “Boo! A Madea Halloween” and “Ouija: Origin of Evil” to get audiences in the mood for the holiday. In Korea, however, where Halloween is not as common, it is not easy to find such spook-tacular spectacles.

But for those who wish to enjoy Halloween fun at the movies in Korea, don’t give up.

Alongside the chart-dominating comedy, fantasy and action movies, a local horror film “Hide-And-Never Seek” was released nationwide on Wednesday.

The low-budget movie is the debut film of rookie director Doo Lee and will satisfy those looking for something different from the conventional horror film.

Shot to look like a documentary, the unsteady camera and close-ups of the character’s faces give an eerily realistic feel to the film that is sure to freak out audiences.

But for those who are looking for hardcore horror, the flick may be disappointing, as the movie is only as scary as its age 15 rating allows it to be. No proper ghosts appear in the film and lines sometimes feel unnecessary and forced to intentionally, yet awkwardly, create an unnatural spine-chilling atmosphere.

Starring Ryu Deok-hwan (“My Son”) and Jo Bok-rae (“The Queen of Crime”), the film revolves around a fearless Afreeca TV (an online video streaming service) show host (Ryu), who streams episodes telling spine-chilling stories and sometimes providing his viewers with a realistic experience by personally stepping outside to live-stream ominous events. The host works with the program’s producer (Cho), who prefers to remain veiled and taciturn throughout until reaching a point where the two encounter a chance to hit the jackpot as broadcasters.

The first half of the film is spent on introducing the two main characters and what they do for living. The real story begins to unfold when the pair attempt to live-stream an eerie building, which is known to have been haunted after a female high school student played a mysterious game a few years back.

Named Self Hide-and-Seek, the Japanese-based horror game entails playing hide-and-seek with ghosts. A player needs to follow certain steps to officially begin and end the game, or else the game never ends, forcing the player to constantly hear the ghost’s voice throughout the game.

At the heart of this game is a transfer student who struggles to fit in at her new school. In an attempt to make friends by getting attention, she films a video of herself starting self hide-and-seek in the bathroom of a non-descript building. However, she is never able to finish due to a group of bullies, who block the girl from completing the last step in the horror game.

Since then, strange things have happened to the girl and at the building, such as the sudden death of a man working at the site of the building’s reconstruction. These bizarre stories have led the host and his producer to investigate the mystery and live-stream their show from inside the haunted building.

Despite being a horror movie, the 89-minute film is quiet and lacks suspense throughout. It also leaves its audiences bewildered about the sudden and unexpected ending. Although there is a good attempt at a twist, it seemed highly inconsistent to the story that the movie had been telling.