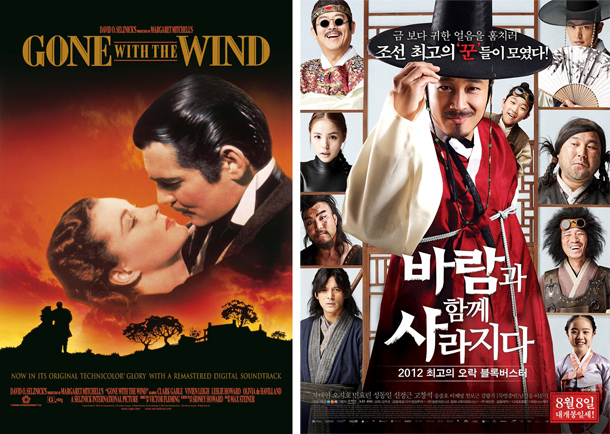 The Korean title of 2012 movie “The Grand Heist,” right, matches the Korean-translated title of the 1939 American classic “Gone With the Wind.” [MGM, NEW]

For sci-fi action fans, however, the title of the movie may be a little distracting, and they may not be able to help themselves from noticing that the English-language title is similar to the ‘80s American hit television series “Knight Rider,” which also is an action-filled story featuring an advanced, artificially intelligent, self-aware and nearly indestructible car.

When asked whether the American hit series influenced the Korean web-movie’s English title, Lee Kyeong-dong from the film’s promotional agency All That Cinema said that the director Kim Geon knew of the show.

“According to the director, he is aware of the American drama. He said that even though the English title of the web-movie was influenced by the series, the spellings are different.”

Whether the director approves or not, there are quite a number of Korean movies that have names similar to renowned foreign classics, as can be shown in this recent case.

Sometimes the English titles sound similar, as they can’t be exactly the same due to copyright issues. Other times, the Korean title of a domestic movie copies the Korean translation of renowned foreign classics instead of the original English title.

Since Korean movies that use the translated titles of foreign classics are not remakes and often not even related to the originals, the imitation issue has triggered some viewers to question the reasons behind using the exact same name.

“It shows how lazy and uncreative movie people are,” said movie critic Kim Young-jin, who teaches in the Department of Film and Musical in Myongji University. “They use the [same] title because it has already been proven to be successful. Although the title may grab people’s attention due to familiarity, imitating the name is wrong [and needs to be fixed].”

In addition to the recent “Night Rider,” other movies that are a part of the issue include a Korean period film “Empire of Lust.” Starring actors Shin Ha-kyun (“The Big Scene”) and Jang Hyuk (“The Flu”), the movie was released in 2014. Its Korean name, however, is precisely translated as “The Age of Innocence,” which is the original title of the novelist Edith Wharton’s 1921 Putlizer Prize winning novel.

This situation may lead some local viewers to think that the Korean movie is a remake or at least deals with similar story to the highly-acclaimed novel. However, while the original novel is a bittersweet romance set in New York City in the 1870s, the Korean movie is a period film that draws on ruthless royal politicking during the nascent stage of Joseon Dynasty (1392-1910).

Another local movie that shares the same Korean title as the Korean-translated foreign classic is “Gone with the Wind.” Originally an American book released in 1936, Margaret Mitchell’s period novel is a coming-of-age story that takes place during the American Civil War and Reconstruction Era.

Three years later, it was adapted into a movie by director Victor Fleming under the same title, and was immensely popular, becoming the highest-earning film made up to that point.

The film with the equivalent Korean title is a period action-comedy which was released in 2012. Titled “The Grand Heist” in English, the film set in the Joseon Dynasty is not faithful to the original novel in terms of the plot.

“Copying the title of successful classics is like plagiarizing someone’s thesis paper,” said Yu Gina, a film critic, and a professor of film and digital media at Dongguk University. “It’s like standing on the shoulders of giants, and it’s an attempt to take advantage of promotional marketing that is guaranteed success.”

Yu further stressed that this is a huge problem in the Korean movie industry and said that this kind of imitation by those in the film industry shows a lack of pride and confidence in what they do.