Kim fails to go pro after 2nd round

Kim fails to go pro after 2nd round 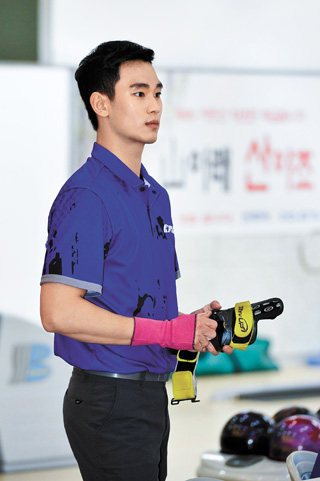 While he was on the verge of starting a professional bowling career, actor Kim Soo-hyun’s attempt was dashed after the second round of the 22nd Korean professional bowling tryouts, which took place over the weekend. The Korean actor scored 192.3 points on average (5,769 points total) after 30 games to come up short of the qualifying standard, which is 200 average points after 30 games, or an aggregate of 6,000 points.

As Kim started the second round, expectations for the actor mounted, especially given his performance from the first round. Kim left the audience in awe during the first round, at one point tallying nine-straight strikes to finish with 214.6 points on average.

In anticipation for the second round, Kim reportedly spent four to five hours a day immersed in training. But Kim was unable to perform as well as he had hoped as he failed to cope with the certain changes of the playing conditions such as oil pattern of the lanes. A senior official from the Korea Professional Bowling Association explained, “We raised the difficulty of the games by changing certain conditions [of the lanes].” Normally, pros bowl in a tougher oil pattern than amateurs.

The first day of the second round was his coup de grace. Kim scored above 200 in only three games out of the 15 he played on Saturday, wrapping up the day with an average score of 183.1. Park Kyung-shin, a pro bowler who helped Kim train, said Kim was under a lot of mental pressure to outdo his record from the first round. Kim ended the second day with an average score of 201.5 points, which wasn’t nearly enough to boost the total average above 200.

The actor may have failed in his quest. Notwithstanding, those who watched him play would agree that Kim did not fail to leave everything he had on the lanes.

The Korea Professional Bowling Association selects 10 male and 10 female athletes each year based on their combined scores after two rounds of bowling tryouts, but for celebrities such as Kim, who can potentially up the popularity of the sport, the second round is often waived depending on the record from the first round.

The actor could have exploited this privilege, but turned down the offer, saying he did not wish to receive any kind of special treatment for being a celebrity.

“Some players give up after having a bad first day,” the official from the bowling body said. “But Kim did not lose his focus. He was even seen cheering on others around him. His love for the sport and his manner on the lanes were inspiring.”

“Things might get complicated, but [Kim] will have another crack at it next year,” said his agency.