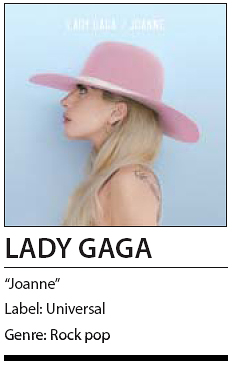 Lady Gaga has spent the last few years proving her vocal chops - the Grammy-winning album with Tony Bennett, the show-stopping “Sound of Music” tribute at last year’s Academy Awards, her performance of “Till it Happens to You” for her Oscar nomination this year - and her strong voice is the star of the promising but uneven “Joanne.”

Those performances may have hinted at what this album could be: a stylistic departure from her dance-pop past. “Joanne” is more like a rock-and-country album with a few dance songs sprinkled in.

It doesn’t feel like a new persona as much as an artist exploring her boundaries. The result is a little haphazard, but it’s interesting to hear where she might be heading.

“Joanne” is named for the pop star’s late aunt. The title song is fittingly tender, though Gaga’s voice sounds affected. Backed by acoustic guitar and simple percussion, it ultimately lends the track a timeless feel.

Gaga employs an equally obvious vocal technique - this time a stiffened vibrato - to lesser effect on the downtempo ballad “Angel Down.” AP