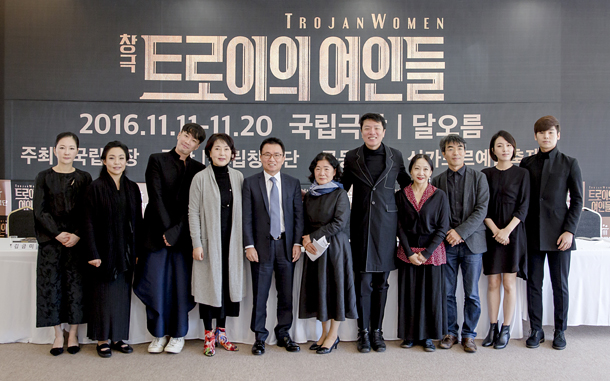 The production team and cast for the upcoming “Trojan Women.” [NATIONAL THEATER OF KOREA]

A new opera that stages an ancient Greek play in the form of changgeuk, or Korean traditional opera, is ready to make its debut.

Based on the Greek play “The Trojan Women” by Euripides, the changgeuk “The Trojan Women” strives to bring together two totally different elements by delivering age-old Greek mythology through the voices of contemporary singers. Well known for his skills in utilizing Asian traditional arts to create new forms of performances, Director Ong Keng Sen came up with another production to introduce the art of pansori (traditional narrative singing).

“‘The Trojan Women’ connects contemporary audiences to this old form of pansori,” said Ong during the press conference held on Oct. 24. “But not only to promote it as traditional culture, but more because pansori has a unique appeal to it. We have put in effort to show pansori’s truest character through the piece.”

As a pansori stage consists of one singer and one drummer, each singer in “The Trojan Women” is accompanied by a certain musical instrument. For instance, Kim Keum-mi, playing Hecuba, the last queen of Troy, solemnly sings along to the sound of a geomungo (six-stringed zither) while the vengeful voice of Lee So-yeon, playing the Trojan princess Cassandra, is followed by a daegeum (bamboo flute).

The story revolves around the final moments of the Trojan Empire after its loss to the Greeks in the Trojan War. Only hours after Troy mistakenly lets in the Trojan Horse full of Greek soldiers, the empire’s men are massacred and the Trojan women face the dreadful fate of being taken away as slaves.

Along with the cultural melange of Greek mythology and Korean traditional art, the despair of the Trojan women depicted in the story also links to the pain that can be found in Korean history.

“The piece looks deep into the Trojan women’s hopeless circumstances,” added Ong. “Through this, I also wanted to reflect the pain Korean women would have gone through during the colonial era and the Korean War.”

The music itself is also a mixture of two totally different genres, with pansori master Ahn Sook-seon and music producer Jeong Jae-il working together in the composition process. Jeong has been recognized for his skills in producing popular music.

As a joint production of the National Theater of Korea and the Singapore International Festival of Arts (Sifa), the piece is also to be performed at the upcoming Sifa 2017.