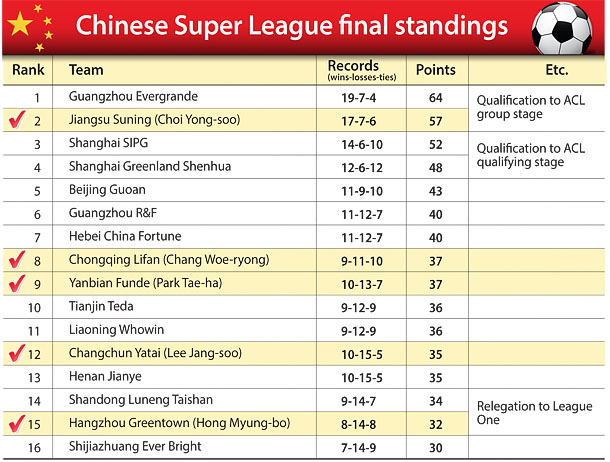 Choi Yong-soo, the Korean skipper for the Jiangsu Suning FC of Chinese Super League (CSL), had a successful debut, with Jiangsu finishing as runners-up in the league on Sunday. But the season wasn’t entirely gratifying for all the Korean-born managers in the CSL. Hong Myung-bo, former Korean national team manager and ex-defender for the team himself, took the helm of Hangzhou Greentown only to witness his team be relegated to the second division of the league under his watch.

“I would give myself 50 points [out of 100],” said Choi, which is quite a stiff self-evaluation considering he just led a team to finish second in a league where top-class players and managers gather from around the world.

Choi left his beloved FC Seoul in late June to take the managing assignment for Jiangsu. Congratulations were in order since it was estimated that Choi was being offered as much as 3.5 billion won ($3 million) by the Chinese club, not to mention a chance to coach some of the world’s best players. Jiangsu had been courting Choi for a year, but instead of congratulating him, many expressed concern about Choi’s move.

Jiangsu had been on a spending spree in an effort to reel in big fish from the transfer pool, including Brazilian Ramires Santos do Nascimento, also known as Ramires, who set a record with a transfer fee of 25 million euros ($27.7 million). Then came Brazilian footballer Alex Teixeira, for whom Jiangsu dropped 50 million euros, a record in Asia before Givanildo Vieira de Sousa, more popularly known as Hulk, joined Shanghai Sipg for 55.8 million euros. Choi’s close acquaintances worried such high-profile players would be difficult to deal with, but Choi managed rather well.

During his first year in China, and only in half a season, he put his team second in the league and even gained berth to next year’s Asian Champions League (ACL). Because Jiangsu finished as runners-up in the CSL, they are advancing directly to the group stage of next year’s ACL, without having to fight through the qualifying stage.

Granted, under Choi’s watch Jiangsu could not topple this year’s champions, Guangzhou Evergrande, who have captured their sixth straight league title. But Jiangsu is the only team to put up a decent fight against Luiz Felipe Scolari, the manager of Evergrande and a legendary skipper from Brazil.

“It feels like I came here only yesterday, but the season has already ended,” said Choi. “This was my first season with Jiangsu, and in retrospect, there are so many things that I need to work on, which is why I cannot give myself full marks.”

Choi added, “It’s a new beginning for us now. After a brief break, we need to put ourselves back into training mode. We can play in the ACL next season. I cannot help but be excited about the coming season.”

The league may have ended but for Jiangsu players, it is too soon to hang up their boots. Jiangsu has made it into the finals of the Chinese FA Cup, and as fate would have it, their opponents are Guangzhou. The first match of the finals is slated for Nov. 20 at Guangzhou’s home turf, Tianhe Stadium. Then Choi will play host to Scolari on Nov. 27 for the second match at Nanjing Olympic Sports Centre.

Choi is confident about the coming finals and his feeling is not unwarranted. For the first time in his managerial career on Oct. 26, Choi took down Guangzhou, claiming a 2-0 victory over the team, which he has not been able to beat even when he was the skipper of Seoul.

“We brought down Guangzhou in the last round of the league,” he said. “Knock and the door will be opened to you, they say, and it finally did. It was such a satisfying feeling to finally beat Guangzhou.”

Other than Choi, Chang Woe-ryong and Chongqing Lifan FC finished eighth in the league while Park Tae-ha (Yanbian Funde FC) and Lee Jang-soo (Changchun Yatai FC) concluded the year ninth and 12th in the standings. The four managed to stay put in the top division. However, Hong of Greentown finished the season at 15th and was therefore automatically demoted to the second division of the Chinese football league. The Huffington Post, in particular, recognized the accomplishment of Park and reported, “Park produced a remarkable accomplishment by placing newly-promoted club Yanbian Fude 9th in the league … This result is considered almost a miracle in the Chinese world of soccer.”

It added, “coach Hong, who has been in the spotlight for taking the helm of Hangzhou Greentown, failed to prevent relegation to the second division next season … Hong had to bend his head in just half a year after joining Hangzhou Greentown earlier this year as a hero.”