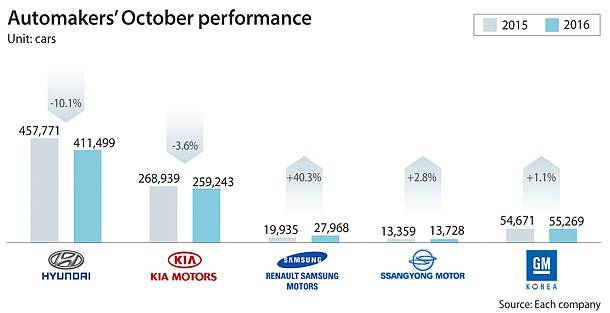 October was a good month for the nation’s smaller automakers but a markedly bad one for industry giants like Hyundai Motor and Kia Motors, both still reeling from labor union strikes that stunted production since the walkouts began in July.

Renault Samsung, especially, is celebrating its best local sales performance in six years and four months, having sold 13,254 cars in October, an 89 percent surge from last year. When tacked on with its exports, the company sold a total of 27,968 cars, its second-best record after 28,455 auto sales in December 2010.

The boost was led mainly by the QM6, the company’s new sport utility vehicle released in September. Sales of the car increased 63.3 percent from September to 4,141 in October. The SM6 sedan has also been very popular in the eight months since its release and saw sales increase by 20.7 percent in October from the previous month.

SsangYong Motor reported total sales of 13,728 cars in October, a 2.8 percent increase from last year. The company saw its monthly sales peak this year in June, when a consumption tax cut on vehicles in the country led to 14,167 cars sold by SsangYong. The October figure marks the company’s second-best sales this year.

The automaker can also credit its SUV model, the Tivoli, for helping revive the SsangYong name. Sales of the model during the first 10 months this year surpassed last year’s record by 35.8 percent, marking 68,618 units.

“Thanks to such strong sales of the Tivoli, SsangYong’s global sales from January to October increased by 7 percent year on year,” the company said in a statement Tuesday.

The Spark has secured its top place among minicars sold in the nation based on accumulated sales this year. A total of 6,412 units were sold locally, an increase of 18 percent year on year.

The automaker’s Malibu sedan has been ranked No. 1 in the gasoline midsize sedan segment since June. October sales jumped 226.8 percent year on year to 4,428.

“The global sales target of Hyundai Motor and Kia Motors was set at 8.13 million units, which is a 1.4 percent increase from last year, but accumulated sales of the two automakers until October lagged behind 2.5 percent year on year,” said Lee Sang-hyun, a research fellow at IBK Securities.

Kia Motors sold 259,243 cars total, a 3.6 percent decline. There are signs, though, that things might be looking up a bit for Kia as the company’s management and labor union reached a tentative agreement on wage negotiations late Wednesday evening.

The agreement, which involves a 72,000 won ($60) raise in base pay, comes roughly four months after talks began in June. Union members will vote on whether to approve the deal next Monday.