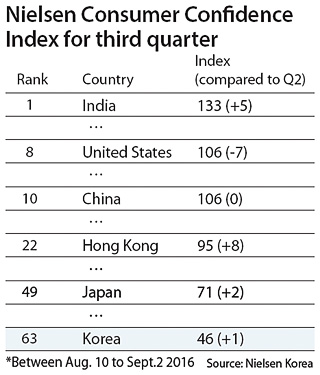 Korea ranked the lowest among 63 countries for consumer confidence in the year’s third quarter, according to data from global research company Nielsen.

This is the seventh consecutive quarter in which Korea made the very bottom of the list.

Published every quarter since 2005, Nielsen’s research on consumer confidence is based on an online survey of over 30,000 people around the world. For this quarter, 502 Korean respondents participated.

The purpose of the research is to find out how consumers feel about their country’s economy based on their future spending intentions and expectations about the job market.

Results are presented in numbers between zero and 200. A reading above 100 points indicates the majority of survey participants maintain a positive outlook on their nation’s economy, while a reading below 100 indicates a negative view.

Korea’s consumer confidence index rose one point from the previous quarter to 46, but still remained last in the list and the only country among the 63 in which the index fell below 50.

The country on the top of the list was India. Its index rose five points to reach 133. The Philippines, which was first on the list in the second quarter, fell to second place with 132.

The United States, whose index rose in the first and second quarters, fell seven points but still managed to maintain an optimistic index of 106. China tied with the U.S. and its index was the same as in the second quarter.

The biggest quarterly increase came from Estonia, which at the time of the survey was awaiting a presidential election, which can often boost consumer sentiment. It added 14 points to reach 84. Egypt, on the flip side, showed the sharpest decline, going down 11 points to 70 due to the country’s failing tourism industry following terrorist attacks and multiple plane crashes.

The global index also rose one point to 99.

Although Korea’s index was sluggish, the Asian Pacific region as a whole rose two points to 109, the highest by continent outstripping South America (105), Africa (87) and North America (83).

The Nielsen survey also questioned participants on whether they have cut their living expenses and how. In Korea, 321 people replied that they cut living expenses from the previous quarter. Among them, six out of ten said that they did so by changing their spending habits.