Former secretary An questioned about Choi

Former secretary An questioned about Choi 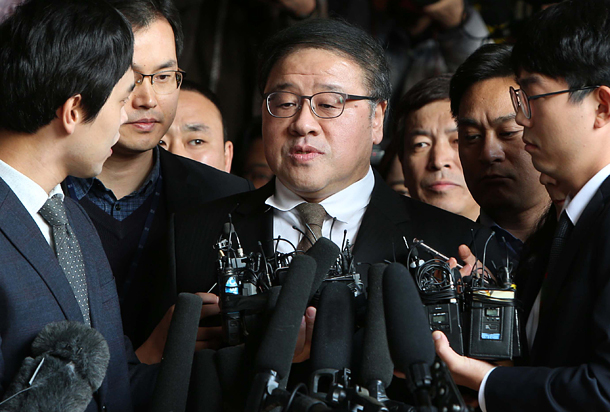 An, a former economics professor, is accused of strong-arming conglomerates to make contributions worth 77.4 billion won ($67.3 million) in total to two nonprofit foundations thought to have been created by Choi.

Standing before reporters on his way into the prosecutors’ office at around 1:50 p.m., a somber-looking An said, “I feel very heavy-hearted,” adding he would “take responsibility for any wrongdoings.”

In the past, An denied that he was involved in raising donations for the Mi-R and K-Sports foundations. He also denied knowing Choi. At a parliamentary hearing on Oct. 21, the former official said, “I never told conglomerates to invest [in the two foundations],” and that companies made contributions “voluntarily.”

But Lee Seung-cheol, vice chairman of the Federation of Korean Industries, reportedly told prosecutors during questioning Friday that he had been instructed by An to receive contributions from conglomerates, directly contradicting An’s previous position.

Officials of SK and Lotte groups who were questioned last week reportedly told prosecutors they were pressured to make contributions to the two foundations.

When asked by reporters whether he played a role in the collection process, An said he would tell “everything to the prosecutors,” which sparked speculation he may acknowledge his involvement.

The next question is whether An would say that President Park instructed him to collect donations for the foundations. The Dong-A Ilbo reported Wednesday that An told his acquaintance he was involved in the creation and management of the foundations “at the behest of the president,” and that the president and Choi had “direct business dealings.”

The foundations are suspected of being started to serve as slush funds for the president after she leaves office. If An acknowledged his involvement in the fund collection from conglomerates at the behest of President Park, Park would face accusations of abuse of power.

An’s questioning came three days after his resignation was accepted by Park along with the resignations of other top secretaries at the Blue House, a reshuffle that was supposed to mollify a public outraged by the snowballing scandal.

The president’s approval rating plunged to an all-time low of 9.2 percent in the latest poll, with growing calls from both the public and politicians for her resignation.

Amid the biggest political crisis engulfing the president, demands that Park should be subject to investigation are on the rise. Under the Constitution, the president has immunity from criminal prosecution except if he or she commits a crime equivalent to treason and insurrection.

Those calling for an investigation argue that while Park is immune from criminal prosecution, she can be investigated and indicted once she steps down. Justice Minister Kim Hyun-woong disagreed with those demanding Park be investigated at a parliamentary hearing Thursday. He said the majority of legal opinions held that the president could not be subject to investigation.

Prosecutors filed a pretrial detention warrant for Choi at around 3 p.m. Wednesday to a local court on charges that she abused a government official’s power and attempted fraud.

A prosecutor involved in the case told reporters Choi was found to have coerced companies to make contributions to the Mi-R and K-Sports foundations by exploiting her relationship with the president in collusion with An Chong-bum. Choi is also accused of demanding Lotte Group make 7 billion won in contributions on top of 4.5 billion won it had already committed.

On attempted fraud, Choi is accused of trying to win 700 million won in funds for two research projects from K-Sports Foundation for her own shell company, Blue K, even though she was not capable of executing the research projects.