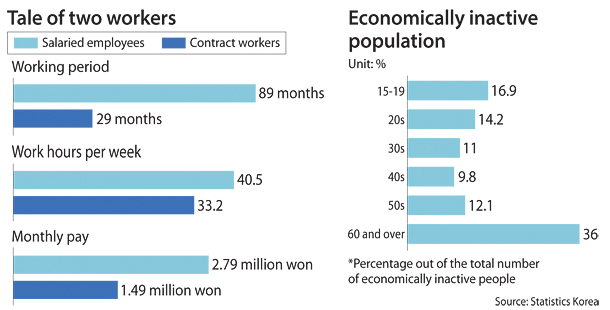 The monthly pay of contract and part-time workers rose 1.8 percent in August from last year, while the figure for salaried employees grew even faster at 3.7 percent, further widening the gap between those holding stable and unstable jobs, according to the latest data released by the country’s statistics agency on Thursday.

“The wage gap between full-time and part-time workers recorded 10.5 percent, a rise of 0.3 percentage points compared to last year,” said Shim Won-bo, a director at Statistics Korea. “There are more contract workers enrolled in health and employment insurance programs from their companies, while fewer people are enjoying national pension benefits compared to the past.”

The data suggests that contract workers are accepting any job available regardless of the type of benefits they receive from the employer. These part-timers are getting more retirement benefits and overtime payment, but other benefits like bonuses and amount of paid vacation have been dropped.

The number of contract workers and part-timers hit 6.44 million in August, a 2.8 percent increase from last year, and they now account for 32.8 percent of the total working population in Korea.

Around 53 percent of such workers said they chose to work at their current jobs voluntarily, which is 2.8 percentage points higher compared to last year. They worked an average of two years and five months at their jobs, a month longer than last year.

Women make up a majority of part-timers, close to 55 percent, and the number continues to rise each year. Statistics Korea data suggested this might be because women were more willing to settle for less pay, as 54.2 percent of economically inactive women seeking work said they want to make 1 to 2 million won a month.

Other government data released Thursday showed that the economically inactive population, including students and retirees, fell 0.5 percent in August year on year to record 15.94 million.

Around 35.9 percent of those not currently working said they were focusing on housework, and another 24.9 percent are currently in school.

About 16 percent of the economically inactive population are thinking about getting a job or starting a new business within a year.

Of those who said they would like to do so within a year, 46.9 percent said they were fine with earning less than 2 million won a month.

The portion of those who felt they were too old to work rose 0.7 percentage points from last year to reach 13.4 percent.