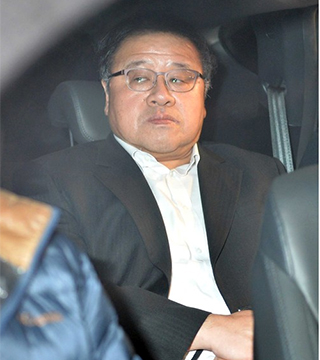 An Chong-bum, former Blue House senior secretary for policy coordination, waits to be transported to the Seoul Southern Detention Center at around 3:40 a.m. Thursday after hours of questioning at the Seoul Central District Prosecutors’ Office. An was placed under emergency arrest late Wednesday. [NEWSIS]

Prosecutors placed a former presidential secretary under emergency detention Wednesday night to further question him over the next 48 hours.

Choi is suspected of pulling strings from behind scenes in state affairs and is at the center of Choi-Gate, the mushrooming scandal that is threatening the survival of the Park administration.

An is said to have told prosecutors during questioning on Wednesday that the Mi-R and K-Sports foundations were created on the direct order of President Park and that he had reported to her details of their management, including the donations, according to the JoongAng Ilbo.

An reportedly said he would take legal responsibility if conglomerates felt pressured to commit tens of billions of won to the foundations.

Explaining why they chose to detain An, prosecutors said An had tried to persuade other people involved in the case, such as former officials of the two foundations, to distort their testimonies and could destroy evidence if set free.

Previously, An claimed he was not involved in the donation collection process and that companies made contributions voluntarily. His testimony could put Park at the dead centre of the scandal over the foundations, which amassed a staggering 77.4 billion won in just days after their launches.

With an emergency detention, which took effect at around 11:40 p.m. Wednesday, prosecutors have 48 hours, or until 11:40 p.m. Friday, to file a pre-trial detention warrant to a court to keep An locked up while further questioning him.

Given the high levels of public disgust with the Park government, whose approval rating plunged to an all time low of 9.2 percent in the latest poll, prosecutors are expected to demand a detention warrant today or tomorrow.