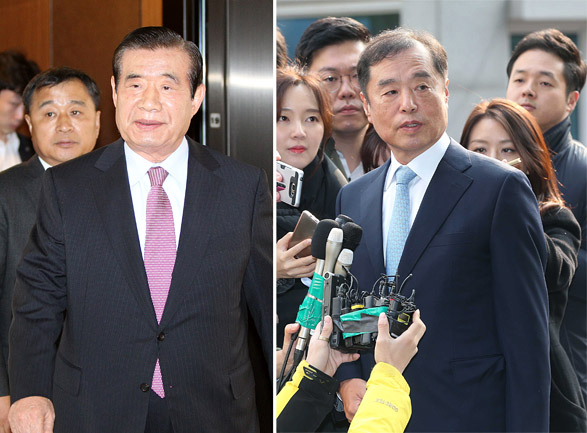 Following her nomination of a new prime minister from across the political aisle Wednesday, President Park Geun-hye Thursday chose an associate of late President Kim Dae-jung as her new Blue House chief of staff.

Han Gwang-ok, a 74-year-old former chief of staff in the Kim Blue House, was named chief of staff to the president, the Blue House announced in the morning. Park also appointed Hur Won-je, a journalist-turned-politician, as her new senior political affairs secretary.

The appointments were the latest in a series of reshuffles in the Blue House secretariat and cabinet. On Sunday, Park appointed new senior secretaries for civil affairs and public affairs. On Wednesday, she nominated Kim Byong-joon, a key aide to the late President Roh Moo-hyun, as her new prime minister.

In the past, Park was known to appoint trusted confidants who had earned her loyalty. By appointing politicians with ties to liberal presidents of the past — of the other side of the political aisle from her conservative Saenuri Party — Park is attempting to survive her biggest crisis by forming a kind of national unity government.

But it’s one of her own devising. She didn’t get the consent of the liberals in advance or allow them any input into whom she should hire, how strong their power would be, or how many liberals would get positions — which threatens to doom the strategy from the start. Already, the three liberal parties that control a majority of the National Assembly have announced they will boycott Kim’s confirmation hearing — which will probably doom the appointment.

Park and her administration are reeling from revelations that the president’s longtime friend Choi Soon-sil had far more influence than she should have, to the point of being a power behind the throne. Choi allegedly had access to top-secret national security documents, influenced personnel appointments in the administration, strong-armed conglomerates into donating to foundations and apparently was involved in major decisions. She was taken into custody by prosecutors on Monday.

Han, 74, is a political heavyweight in the Jeolla region and a longtime loyalist of the late President Kim. He joined Park’s campaign in 2012 to promote national unity and solidarity and was later appointed chairman of the Presidential Committee for National Cohesion. The late president Kim was the strongest political adversary of Park’s father, strongman Park Chung Hee.

Hur is a former journalist for SBS. He was elected as a lawmaker from Busan in 2008 and served as a vice chairman of the Korea Communications Commission from 2014 till 2015.

As of Thursday, Park replaced three of her 10 senior secretaries and the chief of staff in the Blue House. In her cabinet, she replaced the prime minister, deputy prime minister for economy and the minister of public safety and security.

Kim, the prime minister nominee, held a press conference Thursday and declared that he will exercise the rights given to the prime minister by the Constitution “100 percent.” He also said he will consult with the National Assembly and the ruling and the opposition parties on everything, including the formation of a new cabinet.

Kim said he understands the three opposition parties’ decision to boycott his confirmation hearing. The three parties occupy 165 seats in the 300-member National Assembly, making it impossible for him to take the position without their approval.

“I will create a consultative body and talk to the ruling and opposition parties. It may not be perfect, but we can form a nonpartisan, neutral cabinet,” he said.
He said Park met with him on Saturday and offered the post. Although their positions differ on many issues — including government-written history books and the deployment of a controversial U.S.-led antimissile system — Kim said Park assured him of significant power to run the country, particularly on economic and social policies.

Kim also said he believes Park is not immune to a criminal investigation by the prosecution. He said he will advise her to surrender her Saenuri Party membership if this scandal continues to hinder state affairs.

“With the nomination of Kim, the president virtually retreated from the frontline in running the government,” said Rep. Kim Sung-won, spokesman of the ruling Saenuri Party. “We earnestly ask for the opposition parties’ understanding and cooperation.”

Park loyalists in the Saenuri Party tried to defend the president by saying that she offered the top posts in the Blue House and the cabinet to two liberal heavyweights.

“The opposition parties are rejecting our offer to create a nonpartisan cabinet because they do not want to share the responsibility of a coalition government,” Saenuri Chairman Lee Jung-hyun said. “That’s why opposition politicians were recruited by us in the latest reshuffles.”

Although it is regretful that Park did not consult the opposition parties in advance, Lee said, her choices demonstrate how serious she is about getting past the scandal.

“I understand their rage,” prime minister nominee Kim said about the opposition parties. “But I hope they understand that I took the job because state affairs must not stop not even for a day. If they still oppose, I will accept it.”

His appeal did nothing to soothe the opposition parties.

“It has nothing to do with Kim’s qualifications,” Rep. Woo Sang-ho, floor leader of the main opposition Minjoo Party of Korea, said. “No matter what Kim said, we won’t change our position.”

“The president no longer has a 40-percent approval rating. She no longer has the majority in the legislature. She must realize that pushing forward the appointments without the opposition parties’ agreement is impossible,” said Yim Dong-wook, a professor of public administration at the Korea National University of Transportation and vice president of the Korea Institute of Presidential Studies.

“In the end, Park must seek forgiveness for the Choi scandal and formally appeal for the opposition’s help in creating a nonpartisan cabinet."

Since she issued a 90-second apology to the nation on Oct. 25, Park has had no contact with the public. Her order to senior secretaries to resign was released to the press late on the night of Oct. 28 through a single-line text message. She didn’t even consult her own ruling party on the appointments of new secretaries and cabinet members.

“Park knows she had done things wrong,” a ruling party official said. “And she seemed to decide almost all major things alone.”

“This is nothing but a costume play,” Rep. Youn Kwan-suk, spokesman of the main opposition Minjoo Party of Korea, said about Park’s appointments. “She just picked some opposition people and pretends that nonpartisan appointments were made.”

The People’s Party also sneered at Park’s latest appointments. “If she continues her political tricks, the only path before her will be resignation,” Rep. Park Jie-won, acting head of the People’s Party, said.

Rep. Sim Sang-jeung, chairwoman of the Justice Party, said Park’s resignation is the only way to get out of the mess created by the scandal.

“Park’s attempt to create a breakthrough by nominating Kim will end as a pipe dream,” she said. “If she thought the opposition parties would be shaken by her appointments of a Jeolla politician as the chief of staff and a Roh associate as the prime minister, it’s a serious misjudgment. The people are not fools.”

Politicians are increasingly demanding Park’s resignation. On Thursday, six Minjoo lawmakers issued a statement demanding her immediate resignation. Minjoo Rep. Min Byung-doo proposed that all political factions, except for the Park loyalists, must unite to discuss formation of a nonpartisan cabinet.

Weekend rallies around the country are expected to put more pressure on the president. A big demonstration is scheduled to take place at Gwanghwamun Plaza on Saturday and the police estimate that about 40,000 people will participate.