When moving season is at its peak, so go prices

When moving season is at its peak, so go prices 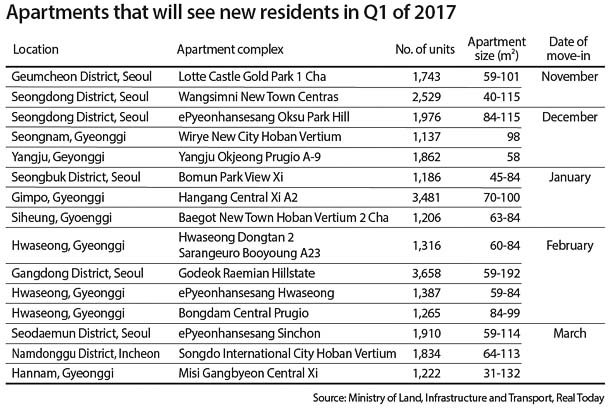 When the peak season for moving homes kicks in next spring, an unholy number of apartment units across 15 complexes in the greater Seoul area will see new residents, affecting not just home values but also prices of jeonse, rental contracts based on one lump-sum deposit.

According to a study by the Ministry of Land, Infrastructure and Transport, a total of 88,360 apartment units will have new residents moving in through January. Another study by Real Today, a real estate information provider, predicts an additional 49,959 units will see new residents in February and March.

That means roughly 120,000 units will be available through to the first quarter next year, which would mean a 42.5 percent increase from the same period this year.

New apartments include massive complexes in the neighborhoods of Godeok and Wirye in southeastern Seoul and the cities of Siheung and Yangju in Gyeonggi.

As Godeok’s apartments are one of the early new apartments being offered in the area, it is expected to be an indicator of the neighborhood’s real estate market.

At the Yangju Okjeong Prugio in Yangju, 1,862 units are expected to have residents move in next month. They are the first apartments provided by a private company in the so-called Yangju New City. At the end of 2014, 2,000 households moved into new apartments within Yangju’s Okjeong District. Those were provided by state-run housing company LH.

There currently isn’t much action, though, in the Yangju New City real estate market. “Because the apartments are the first private-sector apartments in the area, owners of the house aren’t selling them as they are waiting for the prices to go up once the neighborhood infrastructure is built,” said Lee Geum-ja, a realtor in the Prugio apartment complex. “Instead, they are offering a lot of jeonse contracts.”

The price for a two-year jeonse contract in a 58-square-meter apartment in Prugio is between 150 and 200 million won.

Other new complexes expecting people to move into new apartments in Wirye and Gimpo in Gyeonggi are already seeing their jeonse price being affected.

The jeonse price at the Hoban Vertium in Wirye is between 500 and 800 million won, which is equivalent to 60 percent of other jeonse prices in the neighborhood. The jeonse price of the Gimpo Hangang Central Xi, where 3,481 households will be moving in starting in January, is in the mid-200 million won range.

“Some of the areas where there’s a huge supply of apartments available could see their jeonse prices drop,” said Yang Ji-young, head of Real Today research center.

One of the reasons the jeonse price of these apartments is lower than that of other apartments in the surrounding area is because many apartments often put up jeonse when the first batch of residents move in.

Additionally, landlords offer the jeonse cheap so that they can use the deposit to pay off loans on the apartment they purchased.