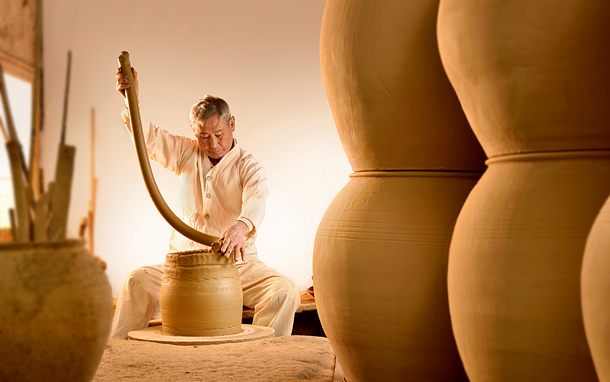 Ever wonder how hanji, Korean mulberry paper, is made? What about onggi, gigantic Korean earthenware?

This weekend, there will be a rare opportunity to learn about all about Korea’s intangible cultural heritage items, meet the country’s best artisans, see how masterpieces are made and enjoy an array of high-quality traditional craftwork.

The “Grand Exhibition on Korean Intangible Cultural Heritages,” the first of its kind, is the government’s ambitious effort to showcase the charms of Korea’s intangible cultural heritage items to the public all in one spot, at Kintex in Ilsan, Gyeonggi.

Included in the programs are the demonstrations of 25 Korean artisans who are the state-recognized owners of the country’s Intangible Cultural Heritage skills.

Korea designates certain traditional skills in various crafts and performances as so-called “Intangible Cultural Heritage” and also recognizes people with those skills. These people are sometimes referred to by their unofficial name, “Human Cultural Heritage.”

There have been reports of how state support for these artisans is inadequate and many of them suffer from financial difficulties maintaining their studios and passing down their talent. Many are concerned that this could lead to the extinction of important traditional assets. The Korean government in 2013 launched the National Intangible Heritage Center in Jeonju, North Jeolla, in the hopes of changing that. The center is the organizer of the upcoming exhibition, and the Korea Cultural Heritage Foundation is acting as the host.

“There have been several venues where artisans can showcase their latest works, but the exhibition is the largest in scale and the most comprehensive,” Seo Do-sik, the chairman of Korea Cultural Heritage Foundation, who is himself a metal artisan, said at a press conference on Oct. 26.

“This is a rare opportunity where people can touch, feel and experience the masterpieces by the country’s best artisans,” Jeon Chil-soo, a manager of the center’s transmission supporting division, told reporters.

The exhibition includes several booths. One of the most notable is the booth where the collections of the Deep Rooted Tree Museum in Suncheon, South Jeolla, are being exhibited. About 180 pieces of the museum’s renowned collections will be shown.

Also, the booth for masterpieces made by state-recognized artisans of intangible cultural heritage items will be another highlight. About 200 artworks by 100 artisans will be on display. Officials say that although the masterpieces have been exhibited at an annual show, the large exhibition hall of Kintex has allowed them to showcase some large pieces, like a bell and an architectural piece.

Works by city or province-recognized artisans will be exhibited as well. About 133 pieces by 45 artists will be shown. Here, people can see how different region made different craftworks based on their region’s specialty and climate.

Another section introduces research conducted at the Korea National University of Cultural Heritage’s traditional textile restoration research center to highlight how traditional cloths are being recreated with the latest technologies and materials.

Conspicuously missing at the exhibition are performance artisans, as craftsmanship is hardly the only intangible cultural legacy of Korea.

Organizers said that next year’s exhibition will focus more on the performance artisans, emphasizing how this is only the first such exhibition in Korea.

There will also be booths for corporations who support Korean artisans and their creative pursuits like steelmaker Posco and cosmetics company Sulwhasoo.

From left: Pillows by Seo Sin-jeong who works with bamboo; bowls by Park Gang-yong who works with lacquer; a piece by Kim Su-yeong, a brassware artisan; work by Jeong Gwan-chae, a dye artisan; a cabinet from the Deep Rooted Tree Museum in Suncheon, South Jeolla. [CULTURAL HERITAGE ADMINISTRATION]