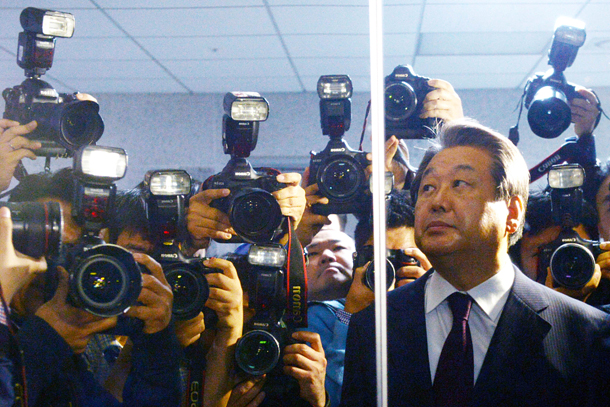 Kim Moo-sung, former chairman of the ruling Saenuri Party, waits for an elevator after finishing a press conference in the National Assembly on Monday. In the press conference, Kim demanded President Park Geun-hye give up her membership in the ruling party and relinquish power to a nonpartisan cabinet. [NEWSIS]

Park Geun-hye’s presidency is hanging by a thread after a heavyweight from her own Saenuri Party pressured her to allow the National Assembly to form a nonpartisan cabinet to run the country, while opposition parties said they have no choice but to join the public movement to oust her.

In a press conference Monday morning, Rep. Kim Moo-sung, former chairman of the Saenuri Party, criticized Park for allowing her lifelong friend Choi Soon-sil to interfere in state affairs in direct defiance of the Constitution.

“The president is supposed to be the last protector of the Constitution, but she violated the Constitution while running the country,” Kim said. “The Choi family abused the president’s power, which is derived from the people, to control state affairs and pursue profits.”

Kim urged Park to give up her Saenuri Party membership to save the party from collapsing with her presidency.

He said Park deserves to be impeached but that would only deepen the power vacuum. He urged Park to accept the National Assembly’s demands to create a nonpartisan cabinet to run the country.

No ruling party lawmaker has raised the possibility of an impeachment over the scandal.

“It is the spirit of the Constitution that a president who violated constitutional values will have to face a path to impeachment,” he said. “But that will shock the country too much. It will bring about grave misfortune to the country and the people. We, therefore, need to create a system to restore public trust and stabilize state affairs.”

Kim demanded Park withdraw her nomination of Kim Byong-joon as prime minister and allow the National Assembly to pick the prime minister. He said Saenuri Chairman Lee Jung-hyun and other Park loyalists in the leadership must resign to save the party.

A political firestorm has engulfed the Park presidency following suspicions that Choi was a power behind the throne for years. Park made two public apologies - lasting 90 seconds on Oct. 25 and about nine minutes last Friday - in order to salvage her sinking presidency. She also appointed politicians with ties to liberal presidents of the past as her new prime minister and chief of staff. None of the attempts, however, was helpful; her approval rating nose-dived to 5 percent, the lowest of all Korean presidents, while tens of thousands poured into the streets over the weekend to demand her resignation.

To fill the unprecedented power vacuum, politicians are presenting different resolutions largely based on their own calculations for the next presidential election.

The main opposition Minjoo Party of Korea said Monday it will be forced to demand her resignation if Park insists on running the country. “Park must withdraw her cabinet appointments and allow the National Assembly to name the new prime minister in order to resolve this crisis,” said Chairwoman Choo Mi-ae of the Minjoo Party. “If she continues to reject this demand, we, unfortunately, will have to start a movement to demand her resignation.”

Rep. Woo Sang-ho, floor leader of the Minjoo Party, issued an ultimatum that Park has until this week to accept the demand.

If Park steps down, a successor must be elected within 60 days. While some presidential hopefuls such as Ahn Cheol-soo of the People’s Party and Seoul Mayor Park Won-soon are demanding Park’s immediate resignation, other contenders including Moon Jae-in of the Minjoo Party are showing more careful approaches, possibly to delay an election campaign.

Moon, who was narrowly defeated by Park in 2012, said she must take her hands off running the government and allow the legislature to create a nonpartisan cabinet to manage the country.

Some went further, demanding a presidential impeachment. Seongnam Mayor Lee Jae-myung said the time has come to use impeachment to pressure Park to voluntarily step down.

Rep. Lee Un-ju of the Minjoo Party also said in an interview with YTN Radio that the National Assembly will be forced to impeach Park. “If she refuses to withdraw her prime minister nomination and if she continues to fight, then we have to work with the people to pressure her resignation,” Lee said. “In the end, the National Assembly will have to sponsor a motion to impeach the president.”

The leadership of the opposition parties, however, are reluctant to use the impeachment card as it is expected to backfire and unite conservative voters in the next presidential election. In March 2004, the Grand National Party, the predecessor of the Saenuri Party, used its majority to impeach then-President Roh Moo-hyun.

As of now, the three opposition parties and independent lawmakers occupy 171 seats in the 300-member National Assembly. They would need the support of at least 29 Saenuri lawmakers to pass an impeachment. Six out of nine Constitutional Court judges’ votes are required to finalize the process. The entire procedure would take months.

About 20 senior Saenuri lawmakers who are not in the party’s pro-Park faction held a meeting Monday morning to discuss their next course of action. They said they are ready to take an “extraordinary measure” if their demands - Saenuri Chairman Lee Jung-hyun’s resignation and Park’s withdrawal of her prime minister nomination - are rejected.

“Since there is zero possibility of the president performing her job, some favor impeachment rather than continuing demands for a resignation,” said a Saenuri lawmaker who attended the meeting.

Impeachment would give the party more time to find and groom a competitive candidate. “If the impeachment motion is passed, Park’s power will be automatically suspended and we can buy time until the Constitutional Court makes a ruling,” he said.

Park loyalists, however, condemned the idea. They said Kim Moo-sung was chairman of the Saenuri Party when Choi and her associates were controlling state affairs and it was irresponsible for him to attack the president.

“Impeachment is something to be discussed after an investigation [against the president] takes place,” said Rep. Chung Jin-suk, floor leader of the Saenuri Party. “About 30 percent of the people are opposing impeachment and resignation, so I also do not agree with it.”