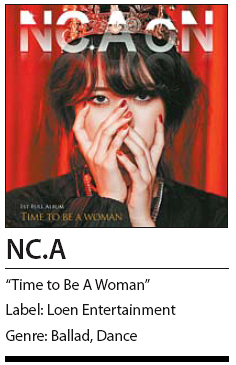 Solo singer NC.A, much loved for her mellow voice, is back with her full-length studio album “Time to Be A Woman.” Until now, listeners were used to her cheerful melodies and dance moves, but this time, the singer went in a new direction, showing off her voice as a more mature singer.

The song “Next Station” follows the feelings of reminiscing over a past love. Along her ride alone in the subway, a girl passes by places that remind her of happy memories. Picturing herself walking hand in hand with her ex-boyfriend like she used to, the girl comes to wish he’d come back one day, daydreaming in the dry atmosphere of the subway.

The album also includes the heart-fluttering feelings of first love. “Cinderella Time” is about a twenty-year-old returning home to meet her curfew, who sings of her wish to stay out longer with her boyfriend. Amid the chilly wind of late autumn, many lovers who long to hold each other’s hands despite the cold air will be familiar with the feelings of this song.

With an album that explores the many feelings of love, NC.A proves herself as a more mature woman.