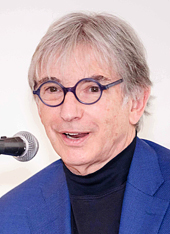 While some of the U.S.’s top orchestras, like the New York Philharmonic, the LA Philharmonic, the Chicago Symphony, and the Cleveland Orchestra, have made multiple visits to Korea, the San Francisco Symphony (SFS), a 105-year old orchestra, will be staging its first ever concert in the country on Thursday at 8 p.m.

The upcoming concert at the Seoul Arts Center’s Concert Hall will be performed under the baton of Michael Tilson Thomas, 72. Thomas has served as the music director and principal conductor of the SFS for 21 years, making him the longest-tenured maestro among major orchestras in the U.S.

According to Thomas, he decided to become the music director of SFS because he discovered in the orchestra, a very special spirit.

“From the first moment when I was guest conducting them, I discovered in them a very special spirit for music making, which was very adventurous one, very passionate one, a serious one but at the same time, very fun and loving, communicative spirit,” said Thomas during the press conference on Tuesday. “You don’t see that a lot in other serious orchestras. It’s unusual.” Thomas referred to the orchestra’s very first Korean member Kim Kum-mo, who joined the orchestra in 1974, as “very much an example of this kind of spirit we have at our orchestra.”

“She’s always very elegant in her presentation when she appears at rehearsals, at concerts and parties after concerts. In addition to being a fabulous violinist, she’s also a brilliant ballroom dancer. She has many, many sides to her very full and beautiful life and all of that shows in the kind of music that she makes with us,” said the maestro.

Included in the program are Igor Stravinsky’s (1882-1971) “The Song of the Nightingale” and “The Firebird Suite,” and Gustav Mahler’s Symphony No. 1 and Chopin Concerto No. 2, accompanied by Korean pianist Lim Dong-hyek. It will also perform “Agnegram” composed by Thomas in 1998, to celebrate the 90th birthday of SFS’ patron and a friend to Thomas, Agnes Albert.

“I have lifelong, and strong connection with Mahler perhaps because of my family background, who used to be village musicians,” said Thomas, referring to the fact that we can hear his love of nature and beauty in Mahler’s first symphony.