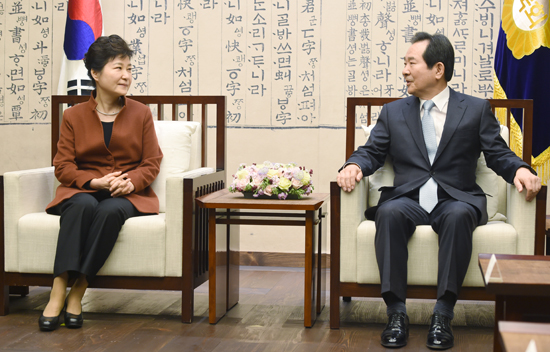 President Park Geun-hye withdrew her controversial nomination of a new prime minister Tuesday and asked the National Assembly to recommend a new candidate.

Park visited the National Assembly Tuesday morning and met with parliamentary Speaker Chung Sye-kyun, as well as ruling and opposition party floor leaders, answering demands that she withdraw her nomination of Kim Byong-joon as prime minister.

“I came to see the speaker like this because I believe it is a great responsibility to normalize state affairs,” Park told Chung in a meeting that took place at 10:30 a.m. and lasted just 13 minutes.

“Our economy is both domestically and externally facing difficulties,” said Park. “There is a continued slump in exports, and domestically, there is hardship in restructuring the shipping and shipbuilding industry, so I ask the National Assembly to join hands to overcome the economic crisis.”

Chung told Park that the new prime minister’s authority has to be made clear, and that “a prime minister that is not approved by the opposition cannot be appointed.”

The opposition parties and even some members of Park’s Saenuri Party want her to yield governing power to a prime minister if she wants to avoid resigning or being impeached.

Park named Kim, who served as a chief policy adviser to the late liberal President Roh Moo-hyun, as her new prime minister nominee last Wednesday, sparking an immediate backlash by the opposition because she failed to consult them on the decision.

Some 50 opposition lawmakers and their aides holding picket signs staged a rally demanding Park stop directing state affairs and step down as president when she arrived at the National Assembly in Yeouido, western Seoul.