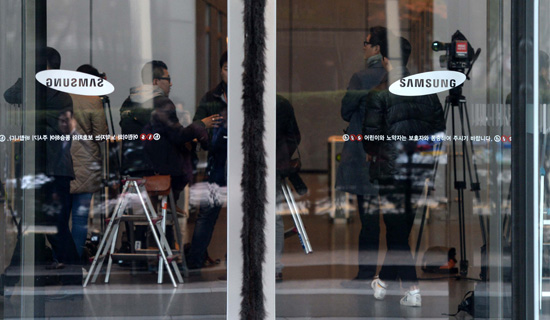 Prosecutors raided offices of Samsung Electronics in southern Seoul early Tuesday in a widening investigation into a scandal over the influence exerted by Choi Soon-sil, the controversial friend of the president suspected of unlawful influence in state affairs.

The company reportedly transferred 3.5 billion won ($3 million) to a shell company created by Choi, Widec Sports, in Germany for the supposed purpose of promoting Korean equestrian affairs. Samsung Electronics CEO Park serves as president of the Korean Equestrian Foundation, whose headquarters was also raided Tuesday morning. Prosecutors suspect some of 3.5 billion won sent by the company was spent on purchasing a horse for Choi’s daughter Chung Yoo-ra, a dressage athlete.

Homes of officials related to the scandal were also raided and documents were confiscated. Prosecutors banned Samsung Electronics chief Park and another executive official at the company from leaving the country.

Prosecutors said a total of nine places were raided Tuesday. Many conglomerates made contributions worth 77.4 billion won to two nonprofit foundations thought to have been created by the 60-year-old Choi, who has been grilled over a variety of accusations including meddling in state affairs, embezzlement of funds from the two foundations and the acquiring of classified presidential documents without clearance.