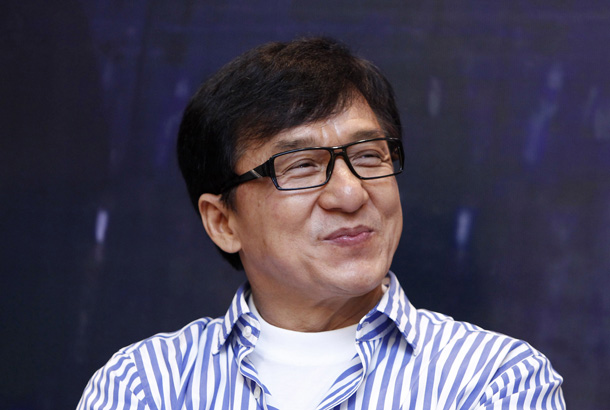 Jackie Chan smiles during a news conference to promote his new film, “Police Story 2013,” in Kuala Lumpur, Malaysia, in 2013. This Saturday, Chan will accept an honorary Academy Award from the film academy’s Board of Governors. [AP/NEWSIS]

LOS ANGELES - As an action star, Jackie Chan never expected to get an Oscar.

So he considers receiving an honorary Academy Award from the film academy’s Board of Governors his proudest professional achievement.

“I never imagined that I’d receive such an award,” Chan said. “I still remember my very first proudest moment was when I received an award for stunt choreography. At that time, I didn’t know much about directing, I just knew how to do action and fighting sequences and stunts. Receiving this honorary award has raised my feelings to another level.”

The 62-year-old writer, director, producer and actor reflected on his career in an email interview with The Associated Press from his home base in Hong Kong. He plans to be in Los Angeles to accept his award in person.

Q. What was your most challenging film to make and why?

A. “Rumble in the Bronx” had a lot of action choreography, fighting sequences, and dangerous stunts. In “Operation Condor,” I filmed in extreme temperatures of over 40 degrees Celsius (104 degrees Fahrenheit) in the desert. I had a near-death accident while doing a stunt in “Armor of God.” In “Rush Hour,” I found the English dialogue most challenging.


How does making movies in Hong Kong differ from Hollywood’s approach to film?

I find Hollywood’s approach to film production very systematic and organized. Of course, being organized is a good thing, but sometimes I feel restrained within set rules. Hong Kong filmmaking is more dynamic because things can be changed on the set while we’re still filming. It’s more flexible and encourages creativity, and if we think of something that might work, we try it right away.


What changes in the industry have been most surprising to you?

Because I’ve been in the film industry for over 50 years, the most significant change I’ve noticed is the change from using 35mm film to digital technology, and even 3-D filming. The improvement of technology has changed how films are now made. What we used to use back then is now part of history. I’m still fascinated by digital technology and the amount of work that can be done in post-production with CG (computer-generated) effects.


What has been was your most exciting Hollywood experience?

All my experiences in Hollywood have been interesting and exciting. I’ve learned so many new things in Hollywood, made new friends and family, such as my American Chinese brother Brett Ratner. I’ve had many great memorable moments while working in Hollywood. I guess the most fun was making the “Rush Hour” series.