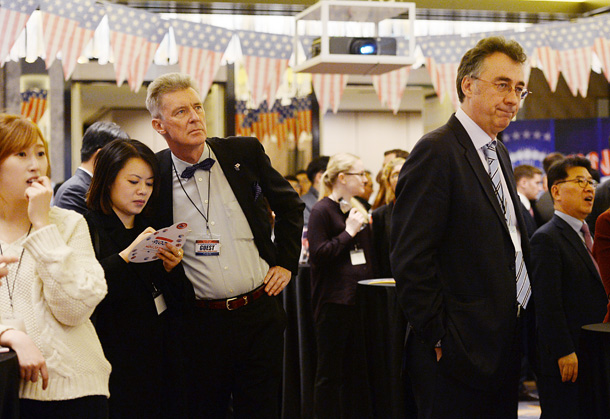 Some 600 people, including Americans, Koreans, Chinese and other nationalities, gather to watch the results of the U.S. presidential election on Wednesday at the Four Seasons Hotel in Jongno District, central Seoul. The U.S. Embassy in Korea hosted the event and live streamed CNN coverage of the election. [NEWSIS]

Hundreds of Koreans, Americans and other expatriates gathered in the final hours of the U.S. presidential election at the Four Seasons Hotel in Seoul Wednesday at an event sponsored by the U.S. Embassy in Korea.

The live streaming of CNN coverage produced waves of excitement and agitation in an audience of some 600 as Donald Trump’s lead became more obvious. A majority of the crowd was Korean, but foreigners included businesspeople, diplomats and international students.

“It is unique to watch the election here in Korea, who is one of our really important allies, and to experience how the Koreans are watching the election as well,” said U.S. Ambassador to Korea Mark Lippert. “It is a really special day for the United States, for all Americans living in Korea, and for Koreans.”

Regardless of the results, the ambassador said he was confident that Korea-U.S. relations will remain strong.

“Our alliance has been strong for over 60 years and I see no change in that,” he said. “The alliance has been through ups and downs and through thick and thin, and it always gets stronger. I am confident that this trajectory will continue.”

As a candidate, Trump shocked many policymakers in Korea by saying both Seoul and Tokyo were getting free rides from America’s military.

As Trump began to pull ahead of Hillary Clinton, her supporters expressed agitation.

Lunch was provided, and many crowded around screens placed throughout the hall, eating while standing.

“It’s a little concerning for me as a Clinton supporter [to see Trump pulling ahead in the polls],” said Courtland Matthews from North Carolina, who is pursuing a master’s degree in international relations at Yonsei University. “Still, there is a huge number of votes that have not been counted yet, so I’m holding out hope that Clinton will eventually pull this up.”

“I am afraid that what I feared most is coming true,” said Kim Seo-yeong, a freshman at Kyung Hee University. “I thought the support that Trump was getting online and on social media platforms was exaggerated by his supporters, but apparently it wasn’t.”

Kim says she wasn’t an avid watcher of U.S. presidential elections until this year.

“Korea is always affected by U.S. policies,” she said. “We need a leader who has experience being a responsible politician, and I don’t think Trump is the one, especially after his so-called locker room talk.”

Cheers broke out when Clinton won Hawaii, and as she led the count with 190 electoral votes against Trump’s 171 a little after 1 p.m. here.

Within 30 minutes, the audience was subdued as electoral votes of Florida, one of the key swing states, went to Trump.

The president-elect had people rooting for him in Seoul during the final hours of the count.

“I am happy and excited,” said Michael Lyssy from Texas, one of the few that stayed until the end of the event. “I didn’t expect this, I thought I was going to go home very sad today, but I am surprised.”

“It is strange [how things turned out],” he said, “but I support Trump because I think he actually cares about the people while I think Clinton is just using people who vote for her.”

The event wound down before the final results came out. While many left the hall stony faced or chuckling in disbelief, some were not surprised at the results.

“It’s the American democratic process at work,” said Matthews. “People have made their decisions, and we just have to go with that.”