Gov’t researchers cash in on IPO

Gov’t researchers cash in on IPO

Researchers at the Korea Atomic Energy Research Institute (KAERI) will be rewarded with 16.5 billion won ($14.2 million) for their contribution to the success of Kolmar BNH, a cosmetics and health food company. It was the first joint venture by a Korean national research institute and private company.

The money is half the 33 billion won raised by Kolmar BNH when it was listed on the Kosdaq in February 2015.

The family of Dr. Byun Myeong-woo, who passed away last month from lymphoma, will be rewarded 4.1 billion won and Dr. Cho Seong-gi will receive 3 billion won. They led the research team from KAERI.

The other half of the revenue raise in Kolmar BNH’s IPO will be reinvested in research and development. 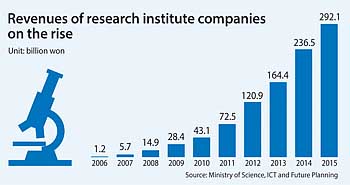 Joint ventures between a national research institute and a private company have been promoted by the Ministry of Science, ICT and Future Planning to encourage institutes to commercialize their technologies. Officially named “research institute spin-off companies,” such ventures receive benefits from the government for a maximum of five years. The system was first started in 2006 and Kolmar BNH, which was already operating at the time, was the first to be registered as such a joint venture.

KAERI received 37.8 percent of Kolmar BNH’s shares in exchange for providing technology to develop health supplements and nanotechnology relevant to cosmetics when the company was established in 2004. The other shareholder and partner is Kolmar Korea, an original equipment manufacturer which supplies materials to cosmetics and health food brands.

Using KAERI’s technology, Kolmar BNH released cosmetics brand Atomy, which is used by atopy patients, and the health food line HemoHIM for patients whose immune systems are weakened after cancer treatment. Last year, the company had 236.2 billion won in sales. 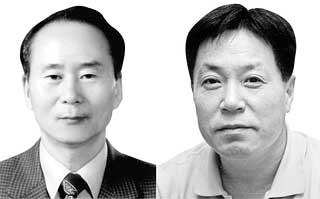 Cho Seong-gi, left, and the late Byun Myeong-woo of the Korea Atomic Energy Research Institute received the biggest payouts among researchers from the IPO of Kolmar BNH. [JOONGANG ILBO]

The company went public in February 2015. However, deciding how much of the money raised would go to researchers wasn’t settled until last Tuesday.

“This was the first case a research institute gained profit via an IPO of its joint venture, so there weren’t any precedents to refer to as to how the money should be divided,” said a spokesman for the Ministry of Science, ICT and Future Planning which overlooks research institutes.

Since 2006, 304 joint ventures between the private and public sectors were set up, and 288 still operate today. Their number has been rising during the last few years: Until 2013, fewer than ten such companies were established every year, but the number jumped to 43 in 2014, to 71 last year and 144 this year through October.

“We’re glad KAERI’s Kolmar BNH got to serve as a model for research institute companies,” said Bae Jae-woong, a senior official at the Ministry of Science, ICT and Future Planning. “We hope to expand this virtuous cycle in which technology development leads to profit and profit leads to more research.”