Mom’s cup of doodles is a winner for Starbucks

Mom’s cup of doodles is a winner for Starbucks 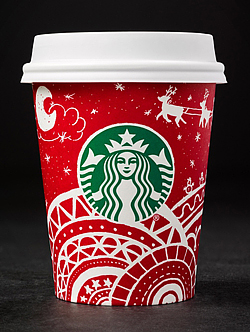 A Starbucks takeout cup designed by a Korean homemaker was unveiled in 75 countries, along with 12 other variations of the Starbucks “red cup,” which began distribution worldwide on Thursday.

The “red cup” is a red version of the Starbucks takeout cup for hot beverages, released every winter since 1997 in celebration of the Christmas season.

In December, Starbucks held the “Red Cup Art Contest” through which the company collected more than 1,200 designs from worldwide via online. The final 13 came from six countries: the United States, Indonesia, Canada, Russia, United Arab Emirates and Korea.

Kwon Eun-joo, a 24-year-old in Daejeon, also submitted her design last year, which she drew on a short takeout cup. Kwon has never received any formal design education and this is her first art piece presented in public.

As a mother of two young children, Kwon liked going to Starbucks as it was one of the few times she could take a short break. “Drinking coffee isn’t an activity that lasts long, but nonetheless, it’s one of my few daily reliefs,” she said. “I hope my design can help people enjoy that short period of time even more.”

Among the 13 red cup variations, 10 will be presented at Starbucks stores in the Asia-Pacific region. There will be two shorts, three talls, three grandes and two ventis. A cold cup for the winter was released the same day. They will be given with every beverage ordered for takeout at Starbucks until Dec. 31.

To celebrate the release of the red cups, Starbucks Korea launched a social media event that will award gifts to Instagram users until Nov. 23.