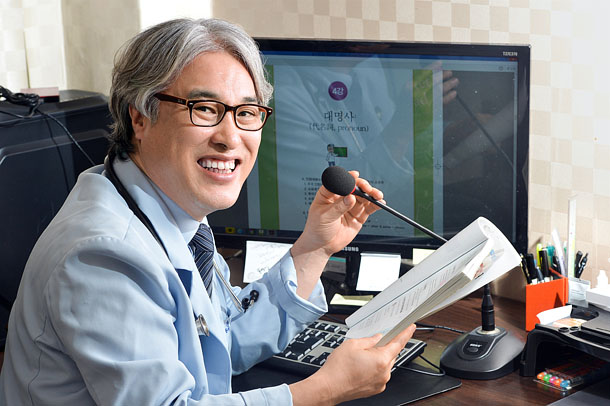 Yoon Sang-won poses at his desk at the hospital. He records his lectures on English grammar and uploads them to his websites for those who are studying. [KIM KYUNG-ROK]

There is a doctor who diagnoses patients having a hard time learning English.

Yoon Sang-won, a pulmonary disease specialist, has been running a website (cafe.naver.com/doctorgoodenglish) that provides English grammar education services for free for 6 years now. The 52-year-old man has nearly 13,500 members on his website. Yoon shares information related to English grammar that he learned after studying for 12 years by himself.

There are some 10,000 documents and materials covering topics from basic grammar to test preparatory information for those who are applying to government jobs. He published a book called “Doctor English” in 2011, which is getting a new edition this year. He even invites his website members to his hospital and gives free lectures.

The JoongAng Ilbo visited his hospital, which is located in Nowon District, northern Seoul, last week. Yoon had a standing microphone connected to a computer on his desk.

“I record my lectures and upload them online,” said Yoon. He was repetitively receiving notifications saying new posts have been uploaded. His students asked Yoon about hardships they had with studying English. He often diagnoses their problems and gives them advice.

Yoon started studying English grammar because of his daughter. In 2004, his daughter was attending elementary school and was having a hard time with English, so Yoon decided to learn it himself so he could teach her. He studied materials he obtained from the internet and began posting his methods on his website in 2010. Soon, his site became very popular. In 2011, he opened his own online cafe called “Doctor English” to share his methods with as many people as possible.

Many of his students are preparing for the government entrance exam, he says. “Five people who were accepted came to me to say thank you and it made me feel similar to saving patients,” Yoon said.

Yoon Jin-ri, his 24-year-old daughter, graduated from University of Southern California and works as an accountant in the United States.

“I really enjoy explaining complicated English grammar to people just like I enjoy informing patients,” Yoon said. “I visited a number of private education institutions that teach English and asked them for teaching positions. I told them I would even take a part-time job but they said I was just too old. But I’m not going to give up. My goal is to live as an English teacher for the rest of my life.”