Kim You-jung is just acting her age : At school and on set, the ‘Love in the Cloud’ star is trying her best

Kim You-jung is just acting her age : At school and on set, the ‘Love in the Cloud’ star is trying her best 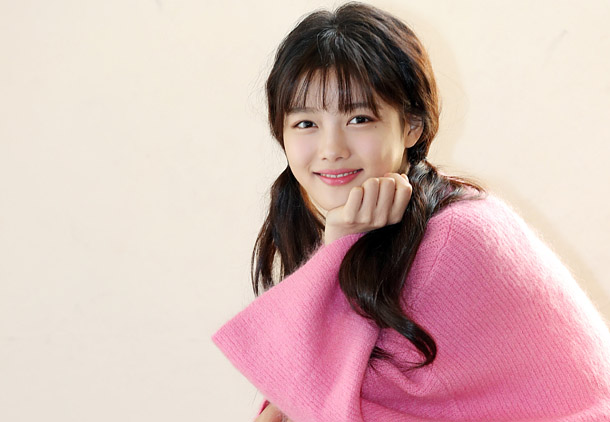 “Love in the Cloud” proved that actress Kim You-jung no longer has to play the younger version of the female protagonist, but can be a female lead on her own. [KIM JIN-GYEONG]

But despite her young age, she is well-respected as a professional. This is understandable considering that she debuted 12 years ago.

Kim had often played the younger version of the female protagonist, however, with “Love in the Cloud,” the KBS period drama that wrapped up recently, she’s proven that she has grown and can now be a female lead on her own.

The drama was a big success, with its ratings skyrocketing since the third episode and eventually breaking the 20 percent mark.

Still, you can’t take the teenage girl out of Kim. She told Ilgan Sports, a Korea JoongAng Daily affiliate, in a recent interview that the award she wants to get the most is the high attendance award from school.

Q. Your five-minute dance scene has garnered such positive reviews. Did you expect such a response?

A. Everyone knew it was an important scene and so we put a lot of effort into it. But we didn’t really expect the reviews to be so good. Besides my dancing, it’s presented so beautifully. Also, in the scene, Yeong [played by Park Bo-gum] is reminded of his mother and her dancing. I think that also left a strong impression on viewers.

In the drama, your character, La-on, is so loved by Yeong, the crown prince. What lines were the most memorable?

There is a scene where La-on asks Yeong what kind of world he dreams of introducing. He says, “it’s where a woman can live like a woman and a child can live like a child.” And then he goes, “you are the first citizen of the world that I wish to create.” I could feel my heart pounding. I was so touched.

Do you tend to be affected a lot by the roles you play?

I definitely do. With “Love in the Cloud,” I got a lot of positive vibes, because the initial character I played, Sam-nom, is the kind that makes others laugh. In fact, I feel there is still a part of Sam-nom that is in me.

Although you are still in your teens, you are quite experienced. What are pros and cons of that?

Some people are more generous with me, because I am so young. But then there are those who aren’t as I have years of experience under my belt. There are these two views. Many people have seen me since I was very young, so when I do well I think they tend to give a lot of compliments. But I know that such generosity won’t last long.

We know that you are also involved in your school activities. Tell us more.

There is a group of friends that I’ve been very close to since I was in my middle school. We hang out together, dance together. Particularly when I’m not shooting a film or a drama, I try to spend as much time as I can with them. We also study together before exams. And we certainly go out to eat a lot. I think this is the kind of joy that we can experience only at this age. So I’m doing what I can to make the most of it.

Are you comfortable with maintaining an acting career and your school activities at the same time?

I’m not sure if I feel comfortable about doing both, but I do my best in both. I still wish I can go to school, without missing a class, throughout the whole year. I know, though, that my friends would laugh at me if I say this. People often ask what kind of awards I wish to get [for acting]. But in fact the award I vie for the most is the highest attendance award from my school. (laughs)