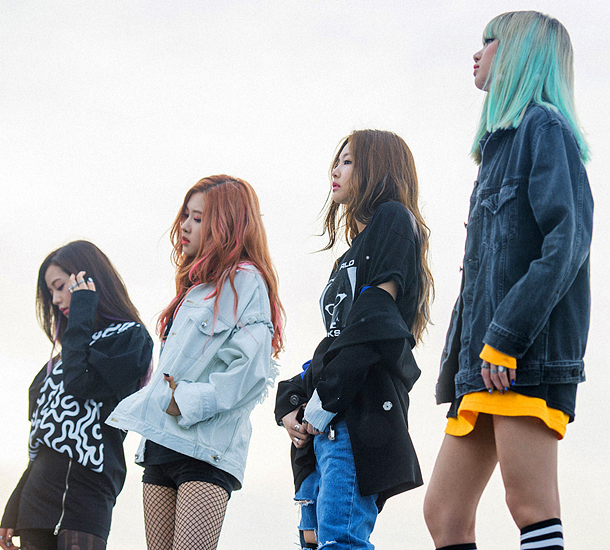 YG Entertainment’s new female act BlackPink instantly rose to fame upon their debut in August. The group’s first album, “Square One,” dominated Korea’s major music streaming charts and also ranked at the top of music charts in 12 countries, including Singapore and Hong Kong.

After accomplishing such an unprecedented achievement for a rookie idol group, BlackPink released their second record, “Square Two,” on Nov. 1. Consisting of the tropical house track “Playing with Fire” and an acoustic folk pop song, “Stay,” the group’s album once again ruled domestic music charts.

When asked how they feel about the comeback, the four girls - Jisoo, Jennie, Rose, and Lisa - were too shy to answer, which was in contrast to their powerful performance on stage.

“This is who we actually are,” Jennie said. “The performance we do on stage is the result of a long hours of practice. We don’t get nervous on stage because we have practiced a lot. But since we are not used to interviews, we are so nervous.”

To discuss their new music and burgeoning career, BlackPink sat down for an interview with Ilgan Sports, an affiliate of the Korea JoongAng Daily.

Q. How do you feel about dropping a new record after just three months and topping music charts?

A. Jennie: “Playing with Fire” and “Stay” are completely different from our debut songs “Whistle” and “Boombayah.” I’m glad and very excited that we brought out something different. Also, I’m extremely happy about remaining highly ranked. I’m glad that so many people have listened to our music at least once.

Jisoo: We were surprised [about the top music chart result]. After checking that we ranked number one, we were so happy that we jumped around. We are thankful for the attention and love.

Rose: I was so thrilled for BlackPink to be loved so much. I’m so glad that among so many artists, we were crowned number one. The only thought that came to mind after realizing our achievement was to work harder.

Can you explain “Playing with Fire” and did you feel anything personal about the title?

Jennie: “Playing with Fire” is a powerful expression of love. I have personally never felt [the feelings described in] the lyrics of the song. But I tried to focus and sympathize with the lyrics by thinking about love I have seen in movies or dramas.

lackPink doesn’t appear much on television other than on music programs. Wouldn’t you like to appear in different shows?

Jennie: Not really. We want to show a perfect performance to make up for the long time [six years] we have been practicing as trainees. So we want to actively take part in music programs. We believe that we can join other shows once we can showcase our perfect performances on stage.

The members of BlackPink practiced as trainees for six years, which is longer than the average four years. Wasn’t it hard waiting for such a long time?

Jennie: Each of us has been telling ourselves to focus on practicing until we become perfect instead of on debut itself. [YG CEO] Yang Hyun-suk promised us that we would debut at an appropriate time. We trusted him and focused on practicing.

Jisoo: We have been practicing as trainees for six years, since 2011. There were monthly evaluations, and we were focused on the evaluations, so each year flew by in the blink of an eye.

Were there some trainees who left?

Jisoo: Because of those who left in the middle of our preparations to debut, I practiced even harder. I thought that if I was to walk away, all of the time and effort that I spent as a trainee would become useless.

Lisa is the only foreign member in BlackPink. Is there anything inconvenient about being a foreigner?

Lisa: When I first arrived in Korea six years ago, I had difficulty communicating because I couldn’t speak a single word of Korean. But I quickly learned Korean after having language lessons everyday. The other members also helped me out greatly.

Is there a certain female act that BlackPink sees as a rival?

Jennie: Instead of a rivalry, I believe that sharing our music with as many people as possible is the bigger priority for us. We want to focus on our music rather than competition.

Is there a direction or a future goal that BlackPink has its eyes set on for the future?

Jennie: Rather than focusing on one specific direction, we want to be able to pull off diverse genres. In order to do that, we practiced as trainees for a long time.