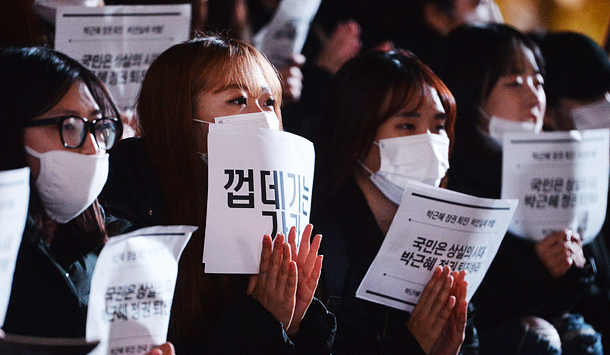 University students are issuing declarations on the scandal involving President Park Geun-hye and her longtime confidante Choi Soon-sil, and they are not alone in their anger. White-collar workers went to Gwanghwamun Square with friends and colleagues to Saturday’s protest, and even middle and high school students joined the rally in their school uniforms to call for the president’s resignation. Even without the kind of activist organizations that brought students together in the 1980s and 1990s, young Koreans voluntarily united in the biggest protest rally since democratization in June 1987.

Until now, the young generation has been indifferent on political issues. In the early 2000s, students became non-activists, and the focus of student movements shifted from political issues to lowering tuition, securing rights for part-timers and supporting gay rights.

But as President Park’s power abuse scandal unfolded, young Koreans became stunned and furious. That anger is best represented by the president’s zero percent approval rating among the 6.4 million Koreans aged 19 to 29 in the latest Korea Gallup poll. When a college student said during the protest on Saturday that “the approval rating for the president among students is not even 1 percent, it is zero percent,” the crowd cheered.

The generation born in the 1980s and 1990s and raised after democratization in 1987 enjoyed more freedoms and economic prosperity compared to their parents. As Korea experienced rapid economic growth, people became less interested in politics.

But things changed in the 2010s. As the economy has been trapped in low growth, with the GDP inching up only 2 to 3 percent each year, jobs have become more scarce, and the youth entering society have been hit the hardest. While the overall unemployment rate for October was 3.4 percent, the unemployment rate for young people aged 15 to 29 was 8.5 percent. Especially among those in their 20s, only 3.7 million of them are employed as of October, and 2.7 million do not have a job.

Politicians talk about youth unemployment during election campaigns but don’t pay attention to the issue after the election because young people are politically indifferent. The Park Geun-hye administration never presented a feasible youth employment plan.

Young Koreans, who have had to fill their résumés with dozens of part-time jobs, are beginning to believe it was politics that made their lives so difficult. They are furious at Choi Soon-sil’s daughter, who once said, “Money is my talent. Blame your own parents.” The youth are exploding because those with power and money can gain special admission to schools and easily attain high-ranking positions. The scandal has turned the silent youth into an active youth. A political revolution by the young is only just beginning.


*The author is the business and industry news editor at the Korea JoongAng Daily.