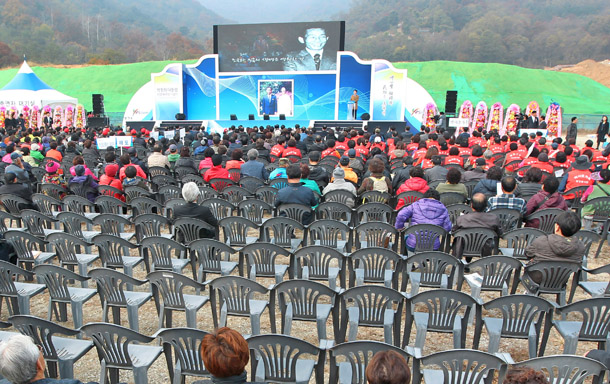 Despite the national scandal, the city government of Gumi, where President Park Geun-hye’s father was born, holds its 99th anniversary memorial service for Park Chung Hee’s birth on Monday near the former president’s birthplace. But many seats were empty. [GONG JEONG-SIK]

The city government of Gumi, North Gyeongsang, is drawing heavy criticism for pushing forward its more than 130 billion won ($110 million) initiative to honor the centennial anniversary of former President Park Chung Hee’s birth at a time when his daughter, President Park Geun-hye, is being investigated for her role in a corruption scandal and people nationwide are calling for her immediate resignation.

According to prosecutors, Park will have to answer to allegations surrounding her friend, Choi Soon-sil, whether Park was involved in coercing conglomerates to provide extravagant funds to two foundations linked to Choi and Park and whether she ordered her aides to allow Choi access to secret state information and records. It will be the first time in Korean history that an incumbent president submits to a prosecution probe.

Despite the national scandal, the city government of Gumi, where Park’s father was born, held its 99th anniversary memorial service for Park Chung Hee’s birth on Monday near the former president’s birthplace, and continues to press for preparations to celebrate the 100th anniversary of his birth next year.

Their plans once included installing a statue of Park at the center of Gwanghwamun Square in downtown Seoul, alongside statues of King Sejong and Admiral Yi Sun-sin, although this was rejected by the Seoul Metropolitan Government.

“Setting up a statue of Park Chung Hee at the Gwanghwamun Square does not meet the purpose of the square,” said an official of Seoul city government’s Urban Regeneration Headquarters. “Plus there wouldn’t be much popular support for the initiative.”

The Park and Choi scandal sparked a massive rally at and around Gwanghwamun Square on Saturday, attended by 170,000 people according to police estimates and one million according to rally organizers, demanding Park’s resignation.

It was the biggest street protest in nearly three decades. Earlier this month, People’s Party spokesman Jang Jin-young called the project to set up Park’s statue in central Seoul “an idol-worshipping act that has stepped over the line.”

Still, the committee and the city government are pushing ahead other initiatives to honor Park’s father.

Gumi Mayor Nam Yoo-chin attended the 99th memorial service for Park Chung Hee on Monday near Park’s birthplace in Gumi. Nam and other city officials were fully clad in traditional clothes, similar to those worn by kings and royalties during memorial services, as they bowed before framed photos of Park and his wife, Yuk Young-soo, and a table overflowing with food.

“Park is a national hero who got Korea on the road to becoming a developed country,” Nam said. “The city government is planning meaningful events to celebrate the 100th anniversary of his birth next year.”

The committee’s initiatives center on building a Saemaul (New Village) Movement-themed park and another park near Park Chung Hee’s birthplace in Gumi by 2017, as well as a museum to honor Park by 2018, which are to cost 135.6 billion won, according to the city government. The city government spent an additional 300 million won on producing stamps and other souvenirs for the 100th anniversary next year.

Critics have protested the extravagant budget planned for the centennial anniversary.

“Park Chung Hee already has monuments honoring him,” said an employee of the Gumi branch office of the civic group People’s Solidarity for Participatory Democracy. “So, many of Gumi city government’s initiatives for the centennial anniversary are in fact repeated projects.”

There is already a statue of Park near his birthplace.

“Anti-Park Geun-hye sentiments are anti-Park Chung Hee sentiments,” the Gumi branch office of Citizens’ Coalition for Economic Justice said in its official statement. “The lavish budget on the centennial anniversary of Park Chung Hee must be reduced.”

“I know Park Chung Hee is a regional hero here in the city,” said a 69-year-old Gumi resident surnamed Baek, “but I don’t think it’s right to produce souvenirs to honor Park at such a time as this.”

“After the Park scandal broke out, much of the residents’ respect toward her father dwindled,” said a 34-year-old Gumi resident.

But the city government seems unfazed by these objections.

“The national scandal should be treated separately from the achievements of former President Park,” said Gumi Mayor Nam. “There is no reason to cease the projects given the budgets were calculated through legal processes.”