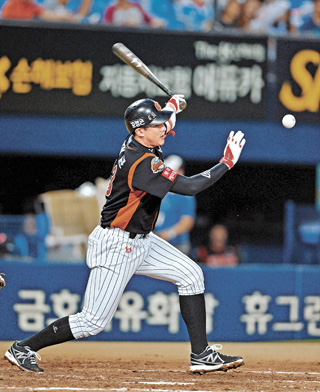 Hwang Jae-gyun, third baseman from the Lotte Giants, is receiving attention from the Major League scouts as he looks to sign a deal after becoming a free agent this year. [NEWSIS]

Hwang Jae-gyun, a Lotte Giants slugger who recently became a free agent (FA), is garnering attention from the Big League, being listed as one of the top prospects in this year’s FA market. Ahead of his showcase in front of Major League scouts, which is slated for Nov. 21 in Florida, all the positive attention is great for the third baseman but alarming for the Giants, as Hwang’s whereabouts may make all the difference in the world next season.

Hwang, who received no bid last year when he took a crack at the Major League Baseball (MLB) through the posting system, witnessed a drastic about-face in his standing in the U.S. league. On Tuesday, Jeff Passan, an MLB columnist for Yahoo Sports, listed Hwang 25th in his Free-Agent Tracker for next season. In his Tracker, Passan has ranked players based on variables such as player’s past performance, opening-day age and potential as well as predicted performance and market value.

In the article, Passan categorized Hwang as a utility player, referring to his ability to cover the ground as an infield in addition to his abilities on third base.

“The 29-year-old Hwang is positioning himself as a poor-man’s Ben Zobrist,” the columnist explained, “with power, speed, contact skills and flexibility. While he’s most comfortable on third base, he has played shortstop and second and is taking reps this winter in the outfield. After a .335/.394/.570 season with 27 home runs and 25 stolen bases in Korea, he’s likely to choose from a number of three-year deals.”

Just a few days earlier, FanGraphs.com, a website that provides statistical reports on players, introduced Hwang as a player to look out for at this year’s FA market.

FanGraphs first showed Hwang’s batting average in comparison to the Korean league, saying, “he’s consistently hit higher than the league.” It went on to explain how Hwang’s slugging ability saw a drastic leap, adding that his power remained consistent this year. In terms of strikeout rates, while Hwang saw a spike last year, largely because he was trying to adjust to the “power breakthrough,” the rate actually witnessed a decrease, and was “26 percent lower than average,” despite managing to maintain his power.

“You can’t do what Hwang did without making some challenging adjustments,” FanGraphs added, “but now his swing is closer than ever to being major-league ready.”

While the slugger is in the Big League limelight, some domestic teams do have their eyes on Hwang.

Kim Jin-wook, a new manager of the KT Wiz, publicly said they are in a dire need of a slugging third baseman. As Hwang is the only person fitting Kim’s description, the Wiz may well send an offer Hwang’s way.

Without Hwang, the Giants’ batting lineup will lose considerable power on the plate. After Lee Dae-ho left the domestic league, the Giants have lacked a power-hitting cleanup hitter. Then came Hwang in 2010, joining the Giants from the Nexen Heroes. What’s more, after Lee’s departure, the Giants lacked a franchise star to captivate fans. Hwang took up that role, and over seven seasons in Busan grew to be one of the most popular players the team has seen. With Hwang gone, the Giants will likely seek a slugging infielder from outside Korea, although it is questionable whether they will be able to find as versatile a player as Hwang in fielding.

At the moment, the Giants may have hard time finding cash in their book to afford Hwang. Last year, the Giants spent 13.8 billion won ($11.83 million) to sign three FAs, which turned out to be a grand failure. After dropping such a large amount, it is questionable whether they will be able to offer a lucrative deal to Hwang, enough to make him stay.