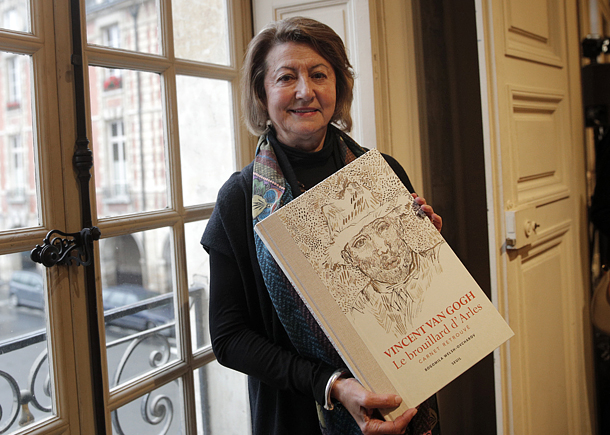 Art historian and Van Gogh specialist Bogomila Welsh-Ovcharov poses with the book “The Lost Arles Sketchbook” during a press conference held in Paris on Tuesday. [AP/NEWSIS]

PARIS - Art experts are disagreeing as to whether a book of previously unpublished drawings reported to be by Dutch master Vincent Van Gogh is authentic or fake.

The book, “The Lost Arles Sketchbook,” collated by eminent Canadian art historian Bogomila Welsh-Ovcharov, is being published internationally after reportedly being found in the southern French city of Arles near a hotel where Van Gogh used to stay.

Welsh-Ovcharov said the sketches appeared in an account book belonging to Mister and Missus Ginoux, owners of the “Cafe de la Gare,” to whom Van Gogh gave numerous works.

“I started to look through all the drawings and each one had his fingerprint,” she said, calling it an “OMG moment” at Tuesday’s press conference in Paris.

According to the University of Toronto website, Welsh-Ovcharov has taught art history for 25 years and has created several Van Gogh exhibitions, including one at the Musee d’Orsay in Paris.

However, Amsterdam’s Van Gogh Museum Director Axel Ruger says its experts have been aware of these drawings since 2008 and after examination they have repeatedly concluded that the previously-unknown sketches are complete fakes.

The museum said the drawings don’t reflect Van Gogh’s development at the time.

He says the drawings use original brownish ink when Van Gogh used only black or purple ink that only later appeared brown because of age.