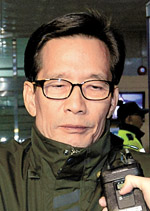 Presidential spokesman Jung Youn-kuk said Park ordered the justice minister to use all investigative powers to conduct a speedy and thorough investigation into the corruption scandal involving Lee Young-bok, CEO of Cheongan Construction, pointing out that suspicions were raised that politicians on both sides of the aisle received bribes from him.

Lee was arrested earlier this month on charges of accumulating some 57 billion won ($48.6 million) in slush funds and lobbying public officials and incumbent lawmakers on behalf of the LCT project, a 2.74 trillion-won high-rise apartment development near Haeundae Beach in Busan.

“Regarding the prosecution’s investigation into the LCT corruption scandal involving Lee, suspicions were raised that astronomical amounts of slush funds were created and used as bribes to politicians from both the ruling and opposition parties and public servants,” Jung said.

“Rep. Park Jie-won, acting head and floor leader of the People’s Party, even made public an accusation that a close associate of the president was involved in the scandal. It is a groundless political attack to raise suspicion that this is a corruption scandal linked to the president.”

Plans for the development were endangered at the start when it struggled to find a construction company. Posco Engineering and Construction, however, signed a deal, allowing Lee to secure nearly 2 trillion won of project financing from 16 financial companies.

“I was informed that a politician who has bragged about having the most intimate tie to the president influenced Posco,” Rep. Park said.

Lee is also suspected of having ties to Choi Soon-sil, the friend of President Park whose alleged string pulling has imperiled her presidency. Lee and Choi were reportedly members of an exclusive social club.

The Blue House’s abrupt announcement about Park’s order about the LCT scandal was largely interpreted as being part of a stalling strategy to save her presidency in the face of mounting public pressure to step down over allegations that she let Choi meddle in state affairs. Even after a million-person rally was held Saturday to demand Park’s resignation - and a possibly larger protest is planned for this coming Saturday - Park has remained silent for more than a week. Her last public activity was a visit to the National Assembly on Nov. 8.

“Rumors about politicians from both the ruling and opposition parties receiving money from LCT are spreading,” a source from the ruling party told the JoongAng Ilbo. “The Blue House is attempting to strike back at the opposition parties and some Saenuri lawmakers who are demanding Park’s resignation.”

The main opposition Minjoo Party of Korea sneered at Park’s move. “It is a comedy that Park issued an order to the justice minister because the president herself is the subject of an investigation,” said Rep. Youn Kwan-suk, spokesman of the party. “We wonder if Park, right now, has the qualification to issue the order.”

Rep. Hwang Young-cheul of the Saenuri Party, a non-loyalist of the president, also said Park’s move was inappropriate. “If the president talks about it, suspicions will be raised about the investigation’s direction,” he said. “It can also invite the interpretation that she is trying to dilute her political crisis.”

Meanwhile, speculation grew that the grand plan for survival being pursued by Park and her allies is to provoke the National Assembly to impeach her. Although in some countries that would be the worst possibility for a sitting president, in Korea it is not. First, the impeachment process is prolonged, and the Constitutional Court must rule on any impeachment. It rejected an impeachment of President Roh Moo-hyun in 2004 after 64 days of deliberation.

A resignation is considered the worst choice for Park. It can’t be reversed. And if the president resigns, a presidential by-election must take place within 60 days. That would give the president’s ruling Saenuri Party almost no time to prepare. Park’s successor would most likely be from the liberal opposition - the biggest nightmare for Park and her allies.

Park and her loyalists have sought to recruit UN Secretary-General Ban Ki-moon as their candidate, although he has never confirmed any intention to accept it. Ban is the party’s best hope, and it is trying to buy time for Ban to complete his tenure, return to Korea and start political activities. Ban’s term at the United Nations will end at the end of this year.

Chairman Lee Jung-hyun of the ruling Saenuri Party, one of the closest associates of Park, also faced strong demands to step down, but refused to do so. Lee said he will resign on Dec. 20, fueling speculation that the timing is related to the Park faction’s bid to recruit Ban.

If the legislature impeaches Park, the Constitutional Court will have up to 180 days to rule on its legality.

Constitutional Chief Justice Park Han-chul and Justice Lee Jung-mi will finish their tenures in January and March next year respectively, and this may also work for Park if she is impeached. If the National Assembly impeaches her after March, the motion will be reviewed by the remaining seven justices on the nine-member bench, unless Park appoints their successors. It will require six out of the seven justices’ vote to finalize her impeachment because the two absences will be automatically counted as voting against the impeachment.

Through her lawyer, Park Tuesday asked the prosecution to postpone its questioning of her as a witness in the Choi scandal. If the lawmakers decide to impeach Park, her replies to those questions can be used as evidence.

The Minjoo Party of Korea hosted a discussion on Wednesday with legal experts. Chairwoman Choo Mi-ae argued that there are already sufficient grounds to impeach Park.

Experts, however, said there were not. “Political impeachment and legal impeachment are different,” said Professor Cho Kuk of the Seoul National University’s Graduate School of Law. “Under the current law, the head of the impeachment committee will be chaired by Rep. Kweon Seong-dong of the Saenuri Party, the chairman of the Legislation and Judiciary Committee. And you never know how long the Constitutional Court will take to rule on it.”

Rep. Park, acting head of the People’s Party, criticized the Blue House’s political tactics. “The Blue House and Park loyalists are overtly daring us to impeach the president,” he said. “President Park and the Blue House started to fight back. They are provoking us to start a presidential impeachment, which will take at least three months and will include various potential game-changers.

“It is incomprehensible that they have decided to fight back even after they heard the demands expressed during the one-million-person protest,” he said. “I urge Park again. The people want her resignation.”