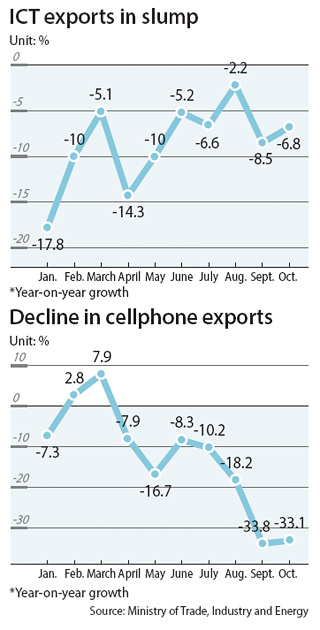 ICT exports declined 6.8 percent year on year in October to $14.9 billion, the Ministry of Trade, Industry and Energy said Thursday. Since a year-on-year decline of 1.6 percent last October, exports have continued a downward slide.

Exports of cellphone-related products fell 33.1 percent year on year to $2.22 billion. Mobile phones, when excluding parts suppliers, saw exports plummet 48.8 percent compared to a year ago to $700 million. Mobile phone exports have been on a decline for six months, after a 27.8 percent year on year increase in April turned into a 26.5 percent drop in May.

“Cellphone exports dropped due to the failure of the new smartphone products and as the global markets became more competitive,” said Kim Jong-joo, a director at the Trade Ministry. The ministry cited midprice smartphones produced by Chinese manufacturers as one of the other biggest factors in the collapse of cellphone exports.

Mobile phones exports have been shrinking in major markets, including China, where they plummeted 41.1 percent, in the U.S. where they are down 28.8 percent, and in the EU, where exports dove 89 percent.

Vietnam and Brazil were only two major markets that saw an increase, where Korean mobile phone sales were up 54 percent and 143.3 percent each from a year ago.

Overall ICT exports to China fell 12.5 percent year on year to $7.76 billion and dropped for the 11th consecutive month.

“It is getting more competitive in China, as the Chinese manufacturers started to produce cellphones and semiconductors,” said Kim at the Trade Ministry.

Exports to the United States dropped 2.5 percent year on year to $1.67 billion, and cellphone exports, which fell 28.8 percent, dragged down the overall figure as well.

On the other hand, exports of semiconductors rose 1.7 percent year on year to $5.59 billion and computer and related products rose 7.4 percent to $700 million. The Trade Ministry said the semiconductors sector remained strong as there were more global demand for cellphones and as the prices of memory products rose in general.

Exports of semiconductors to China, a country that accounts for 60 percent of semiconductor exports, dropped 6 percent year on year to $3.52 billion, but they rose significantly to Vietnam (21.1 percent) and the United States (5.4 percent).

Exports of computer and related products rose 7.4 percent from a year ago to $700 million, and this was the first time since December 2014 that the figure reached $700 million.

ICT imports also dropped 6.5 percent year on year to $8.2 billion as Korean manufacturers imported fewer cellphone parts and semiconductor products. Imports from Japan rose 9.4 percent compared to the previous year to $930 million and the figure for Vietnam increased 11.2 percent to $450 million. Imports from China and the United States, on the other hand, fell 15.1 percent and 10.3 percent each.

Imports of computer and related products rose 3.8 percent from a year ago to $780 million as demand for auxiliary memory devices rose.