Prosecutors’ plans to quiz Park delayed by her lawyer

Prosecutors’ plans to quiz Park delayed by her lawyer 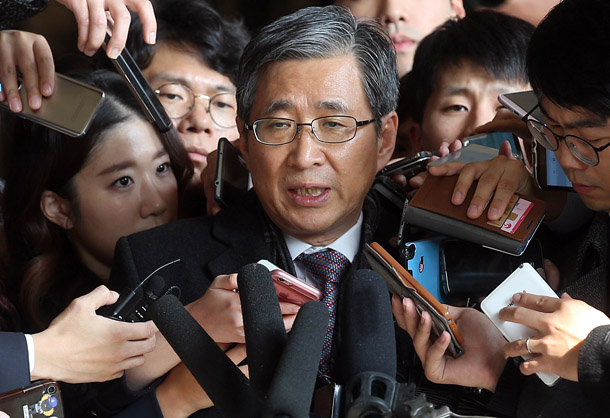 Reporters rain questions down on Cho Won-dong, former senior presidential secretary for economic affairs, who presents himself to the Seoul Central Prosecutors’ Office on Thursday to face questioning on whether he pressured CJ Group to remove then-vice chairwoman Lee Mie-kyung from her post in 2014. [JOINT PRESS CORPS]

Prosecutors’ plan to question President Park Geun-hye face-to-face by Friday at the latest fell apart, as Park and her lawyer maintained that they need more time to prepare for what will be the first questioning of a sitting president.

The failure by prosecutors to question Park into allegations involving her controversial friend, Choi Soon-il, over matters ranging from Choi’s meddling in state affairs to her acquisition of classified information, came despite Park’s previous pledge to submit herself to an investigation.

“I will cooperate to help arrange a questioning of the president in the coming week,” said Yoo Yeong-ha, a lawyer hired by President Park earlier this week, in a statement.

Yoo, a former prosecutor, said he was seeking to go over all the facts involving his client.

Prosecutors initially hoped to probe Park face-to-face on Wednesday but were forced to delay questioning until Friday, as Yoo said Wednesday he needed at least a week to prepare for the unprecedented questioning.

A prosecutor involved in the special investigation team into Choi said Thursday that questioning Park must take place on Friday at the latest, since the indictment deadline for Choi falls on Sunday. The prosecutor said questioning Park on Saturday was not “physically possible” because they would then not have enough time to reflect her testimony in their indictment of Choi.

“President Park’s involvement in the abuse of power by Choi and former presidential secretary, An Chong-bum, was confirmed based on testimonies of those involved and evidence,” said the prosecutor, speaking on the condition of anonymity.

It remains to be seen whether prosecutors will describe Park as an accomplice to Choi’s scam or merely a person related to the case in their upcoming indictment of the 60-year-old Choi, whose relationship with Park dates back to the mid-1970s.

Park cannot be charged with a criminal offense while in office, except in cases of insurrection or treason, therefore prosecutors have stated that Park would be questioned as a witness rather than a suspect, but said she would be informed of her Miranda rights. This was seen as an indication that prosecutors are viewing Park as involved in the Choi scandal with legal liability.

Since prosecutors are seeing Park as a witness instead of a suspect, there is no legal basis for them to force her to submit to questioning. However, Park’s refusal to submit to questioning this week contradicts her earlier stance, delivered in a speech before the nation on Nov. 4, in which she pledged to fully submit to an investigation, promising her “best cooperation to reveal the truth.” Park’s lawyer said her determination to subject herself to the investigation “has not changed.”