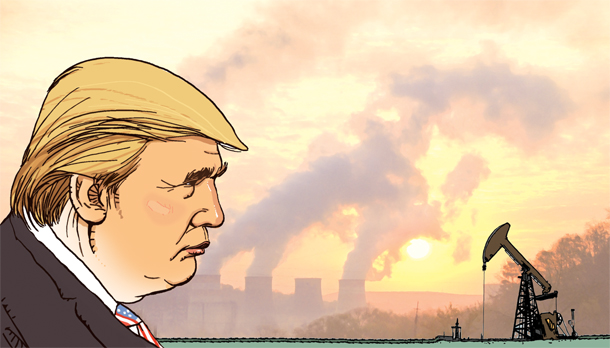 As Koreans are furious and frustrated by the unprecedented political scandal, the unexpected outcome of the U.S. presidential election also surprised everyone. While some believed that Donald J. Trump’s victory was as likely as the Sun rising from the East, the unlikely scenario became a reality. As the fourth industrial revolution is approaching like a tsunami, why is politics so hopeless domestically and internationally?

Trumpism is about to begin undoing Obama’s legacy. A reversal in climate and energy policies is expected for sure. Myron Ebell has been named to lead Trump’s EPA transition team. As a fossil fuel advocate is to head the Environmental Protection Agency, so the name of the agency may have to change.

Trump hopes for a dissolution of the Paris Climate Agreement. He denies that climate change is actually happening. He even claimed that it was a hoax by China, aiming to weaken competitiveness of American manufacturing industries. He is eager to nullify ratification of the Paris Agreement, so the implementation of the new climate system is in jeopardy. But the United States cannot immediately leave. The agreement requires participants remain for three years and should have a one-year grace period upon declaring its intent to withdraw.

Trump’s “America First Energy Plan” foretells removal of regulations on traditional energy industries. Mining development will be promoted, the regulations on hydraulic fracturing of shale energy will be removed. Regulations on petroleum and gas drilling would also be removed. If he goes with his plan, the carbon emissions of the United States would increase 16 percent by 2024 compared to Obama’s plan.

Then, how would climate change go? The average temperature of the earth is rising. It’s up one degree Celsius from the pre-industrialization era with an average annual temperature of 14.1 degrees Celsius (57 degrees Fahrenheit). The greenhouse gas density has increased 40 percent. The sea level is rising and thawing is accelerated. Carbon dioxide is the main culprit. Without controlling carbon emissions, the earth will be faced with a complex crisis of resources, economy, politics and society. At the 21st Conference of the Parties of the UN Framework Convention on Climate Change in Paris in 2015, 195 nations joined a new climate system. The Paris agreement went into effect on Nov. 4 and has been ratified by 109 countries.

Conspiracy theories about global warming have spread since the 1990s. “Global warming is a conspiracy that exaggerates climate change and blames carbon dioxide.” I remember watching the documentary “Greenhouse Conspiracy” at the British Council in Seoul in 1992. In 2009, the BBC broadcast a report denying temperature increase.

Those who believe that climate change is a conspiracy argue that meteorological satellite data showed no sight of global warming, and there was no correlation between carbon dioxide emissions and temperature increases. They also questioned why scientists talk about global warming after warning about the Ice Age in the 1970s. Trump shares that view. Now that he has been elected, the climate structure is in disaster. When President Bush defeated Al Gore in 2001 and withdrew from Kyoto Protocol, he had the same argument.

The Intergovernmental Panel on Climate Change report is a textbook for climate change. Currently, Dr. Lee Hoe-sung is the chair. Since the panel was established with 3,000 experts in meteorology, marine science and economics in 1990, it has produced scientific, technical and socioeconomic analyses on climate change. In 2014, the ICPP reported that the possibility that human activities, including use of fossil fuel, were the “extremely likely” cause of climate change.

In 4.5 billion years of history, living species went through five large-scale extinctions due to natural causes such as volcanic activities, crustal movements and the collision of a meteorite. In 2012, academic journal Science published a paper that claimed the disappearance of 3 million Mayans in the year 900 was due to climate change. At this rate, the earth would suffer greater damages in the 21st century than in the last 10,000 years.

The World Economic Forum’s 2015 Global Risk Report is also meaningful. It ranked failure to adapt to climate change and extreme climate phenomena as the biggest threats in analyzing economic, environmental, geopolitical, social and technological risks. This year’s report also named climate change as the biggest risk for the next 10 years.

It is not easy to set national direction and strategies on climate change scenarios for the year 2030. The subject of climate change is overwhelming and calls for civil discussion. Therefore, we need a governance system that is more systematic and comprehensive. Legal, structural and technical bases such as developing indexes and measuring systems must also be established. Most of all, we need political leadership and civilian-government partnership to oversee the operation. But domestic and international politics are absurdly shaken.


*The author, a former minister of environment, is the incoming president of the Korean Foundation of Science and Technology Societies.