[At Home with Her Excellency, Pakistan] Pakistan’s traditions right at home in Itaewon

[At Home with Her Excellency, Pakistan] Pakistan’s traditions right at home in Itaewon 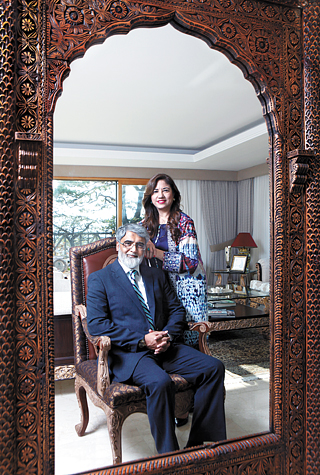 Pakistani Ambassador Zahid Nasrullah Khan and his wife Raheela Nasrullah Khan pose in front of their favorite object within the residence, a wood-framed mirror from Swat, a river village in northern Pakistan. [PARK SANG-MOON]

An enthusiast golfer who enjoys the simple pleasures of nature, Pakistani Ambassador to Korea Zahid Nasrullah Khan barely hesitates to answer which area in his residence he likes the most: “different places at different times of the day.”

In the morning, he and his wife Raheela Nasrullah Khan step onto their patio and absorb the fresh dew over a warm cup of Pakistani tea. At midday when they’re at home, the reception hall and their front lawn are impeccable areas to bask in the cascade of sunlight. At night, the couple savors a sprawling view of Itaewon-dong, central Seoul, their neighborhood.

“We absolutely love it here,” says Mrs. Khan. “The residence shows off a different appeal every single day, and no day looks the same as the day before because we have large windows reflecting the season changes of the year.”

“The house will be missed dearly when we leave Korea next year,” she adds. The following is an interview with Ambassador Khan.

A. My family lives in a beautiful house in Itaewon, a well-known neighborhood, near Hannam-dong. The house is unique in the sense that the exterior exhibits a somewhat traditional Korean design, whereas the interior is very modern. Each room in the house boasts wall-sized windows that look over the city and provide a breathtaking view at any time of the day. Just a few minutes walking up a hill near the house, we’re able to reach the Grand Hyatt Hotel and my personal favorite, Namsan Park. A few yards down the hill is the hustle-bustle of Itaewon, Seoul’s most exotic place of mixed cultures, where there are a variety of shops, bars and restaurants. Our neighborhood is also surrounded by several other ambassadors’ residences.

We moved to our current residence two months ago, hence it is new for us. However, there isn’t a single corner of this house we don’t love. In fact, we spend different times of our day at different locations in the house. We spend our mornings in the reception hall or, if outdoor weather conditions allow us, on our patio drinking a cup of tea. At night, we’re upstairs at our porch marveling at the beautiful night lights.

Which features in your residence are similar or different to Pakistani houses?

This house reminds us of Pakistan because it highly resembles the structure that modern houses there have: a big garden, spacious rooms and a basement for personal use.

One major aspect that sets Pakistani houses apart from Korean houses is that the rooftops are horizontal - not slanted like here - except in northern areas where it snows heavily during the winter. And in big cities, there aren’t many high-rise apartments like in Korea. In terms of interior design, Pakistani people tend to use a variety of textures and colors on their walls and display small decorative details here and there.

Our favorite object in the house is indisputably the wood-framed mirror we have in our reception room, a traditional highlight of Pakistani culture that’s entirely handcrafted. The intricate mirror from Swat, a river village in northern Pakistan, makes us feel proud of our nation’s carpentry prowess, and we’re delighted to share it with our foreign colleagues. My wife and I personally bought it in 2013 at a furniture shop in Lahore [the capital of the Pakistani province of Punjab].

Left: A storage box in a corner of the reception hall highlights Pakistan’s rich tradition of producing handmade wooden furniture. On top is an oil painting of a man riding a camel in the Thar Desert. Right: The reception hall boasts traditional and modern home decor from the couple’s home country. [PARK SANG-MOON]

What other Pakistani highlights are there?

In our reception room, there’s a handmade storage box near the entrance that’s painted with bright, colorful hues. An oil painting hanging on top of it pictures a Pakistani man riding a camel in the Thar Desert, which spans an area of 175,000 square kilometers (67,568 square miles). In a corner leading to the dining room, where we have a lamp made out of camel skin, we’ve displayed silver antiques. Near the wooden mirror, we’ve exhibited onyx [multi-layered stones] vases.

How do your countrymen treat visitors at their home?

In Pakistan, having guests over at your place is considered an honor, and pampering them with tea and food is the common tradition. Everything starts with tea and ends with tea. Besides main course servings, we traditionally serve snacks like samosa [fried or baked dumpling with a savory filling], pakora [fritters], sandwiches and biscuits. It’s actually a fusion of Pakistani and British traditions.

How have you been adjusting to Korea so far?

I have thoroughly enjoyed my stay of nearly three years in Korea. Since I’m a sports person, I especially took pleasure in golfing. The best golf course I’ve played on so far was the Lotte Skyhill Jeju Country Club on Jeju Island. I had the privilege of playing with Korean golfers in a professional-amateur game during an open tournament.

Korea is an amazing country. I enjoy all four seasons, which are similar to ours in Pakistan except summer is shorter here. The heating system is so good that I hardly feel cold when I’m inside a building, even though the temperature outside is below negative 10 degrees Celsius (14 degrees Fahrenheit).

In terms of my neighborhood, Namsan Park and Itaewon never bore me. There are lots of Turkish, Arabic and Pakistani restaurants to choose from. Overall, Koreans are very nice, friendly and kind people. One little difficulty I feel when getting around the city, especially when shopping, is the language barrier.

Left: Silver antiques once used in everyday life are displayed in a corner of the reception hall as decorations. Right: An elaborate lamp made out of camel skin lights up the dining room. [PARK SANG-MOON]

What traveling or dining advice would you give to a foreigner visiting Pakistan?

We’re from the city of Lahore, which is considered the hub of culture and food in Pakistan. For any visitor, the first stop we’d recommend is the food street called Old Lahore. It’s a modern and newly built tourist area that runs adjacent to the Badshahi Mosque, a Mughal era mosque. Eateries like the Andaaz Restaurant and Cuckoo’s Den are highly recommended as they serve top-notch traditional Pakistani food and their terrace views allow visitors to soak in the majestic view of the mosque. We highly recommend going here at night to make the most of the ambience.

Our second suggestion would be to visit the popular M. M. Alam road, which hosts some of the finest restaurants in Pakistan. This street is the place to go if you’re searching for fine dining in French, Italian, Thai or Norwegian cuisine. This street depicts the modern side of Lahore and shows off what the night life of it is all about. My family’s favorite pick from this street is Cafe Aylanto.

Besides eating, in the northern parts of Pakistan lies the Karakoram mountain range, home to the world’s highest peaks. It’s a great getaway with untold natural beauty, great for sore eyes.