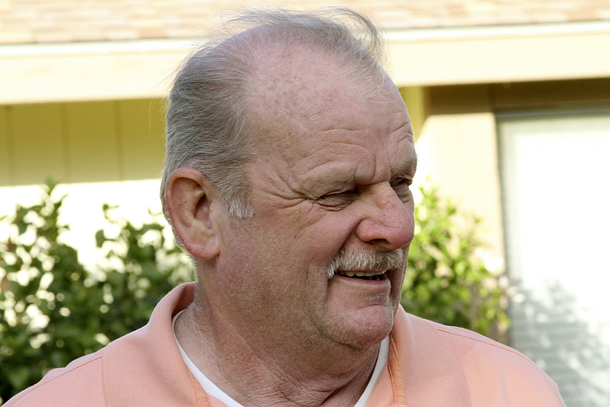 John Suttles at his 65th birthday party in 2011. He died while helping make the blockbuster film “Avengers” in 2012. [AP/NEWSIS]

LOS ANGELES - As hundreds of names scrolled up the screen after 2012’s “The Avengers,” moviegoers who remained glued to their seats for a taste of the next treat in Marvel’s superhero universe didn’t know one name was missing - that of John Suttles, a truck driver who died helping make the $1.5 billion blockbuster.

Every year, workers on both sides of the camera are maimed, burned, break bones and even die striving to deliver entertainment that packs multiplexes and commands top TV ratings. Injuries come not just from obvious risks such as stunts and explosives, but from falls off ladders, toppled equipment and machines without safety guards.

Yet in an industry where virtually everything is tallied and every success is touted, set accidents remain largely hidden and the consequences usually amount to mere thousands of dollars in fines paid out of multimillion-dollar budgets.

The Associated Press determined that since 1990, at least 43 people have died on sets in the U.S. and more than 150 have been left with life-altering injuries, numbers derived by combing through data from workplace and aviation safety investigations, court records and news accounts. And those figures don’t always tell the entire story: The AP found several instances in which major accidents did not appear in an Occupational Safety and Health Administration database of the most serious accidents.

The most glaring omission is the 1993 shooting death of actor Brandon Lee during filming of the movie “The Crow,” despite North Carolina OSHA officials amassing a 1,500-page investigative file. An agency spokesman blamed a clerical error.

Internationally, at least 37 people have died in filming accidents since 2000, including a worker killed Aug. 26 in Budapest on the set of the “Blade Runner” sequel.

Injuries to actors typically make headlines, like Harrison Ford’s broken leg on the seventh “Star Wars” film in 2014. But that’s not the case when most off-screen workers are hurt.

“I think it’s always been something that’s been swept under the rug,” said Stephen Farber, a journalist who chronicled the aftermath of the deadly 1982 “Twilight Zone” helicopter crash that killed actor Vic Morrow and two children.

OSHA investigates most workplace accidents, whether they take place on a movie set, a factory or a farm.

The death of Lee, superstar Bruce Lee’s son, prompted changes on how firearms are treated on sets. Yet it also illustrates the paltry sums companies face after serious accidents. OSHA fined “The Crow” producers $84,000 - the highest filming fine levied since 1990 - but later reduced the penalty to $55,000. “The Crow” grossed more than $50 million.

The AP’s review found that in nearly half the instances where OSHA fined studios after a serious accident, the penalty was reduced.

John Suttles fell from the back of a truck he was preparing to drive from a Los Angeles studio to an “Avengers” set in New Mexico. In his case, a film company affiliated with Marvel owner Walt Disney paid a $745 fine for not having proper hand-holds on the truck and not supplying drivers with first-aid kits.

The Vietnam War veteran had just a few hours of sleep before he was called back to pick up the Marvel load and had been working on “The Avengers” for weeks, said daughter Lanette Leon, even ducking out early from his 65th birthday party to make a delivery for the then-secretive film.

Leon said her only interaction with the companies after her father’s death was going through the arduous process of securing enough workers’ compensation money to cover her son’s schooling, which Suttles had been paying for. Workers’ compensation is the “exclusive remedy” for the majority of workers injured on the job and the families of those killed and prevents them from suing unless their cases fall into a handful of narrow exceptions.

“It was very disheartening to see that in the end, that they treated him like a number,” Leon said.

Marvel and Disney did not respond to questions about Suttles’ accident.

Hassan Adan, a regional manager for California’s workplace safety agency, said settlements are determined on a case-by-case basis and are intended to correct dangerous situations.

A broad coalition - including the major Hollywood studios and labor unions - conducts monthly safety meetings and has created its own training program. Since 2003, the Safety Pass program has trained more than 50,000 workers in production, and it will begin an ambitious program this year to give refresher courses.

Some accidents, like the February 2014 death of assistant camera operator Sarah Jones on a Georgia train trestle, become catalysts for broader safety discussions.

Earlier this year, Jones’ parents brought a hush to a crowded set in Los Angeles, where actresses Shirley MacLaine and Amanda Seyfried prepared to shoot a scene for the upcoming film “The Last Word.” Richard Jones described his daughter’s frantic last moments before imploring the crew, “Please look out for each other.”

MacLaine stepped forward, telling the Joneses, “Thanks for reminding all of us we’ve got to protect each other.”