A look at the many faces of Fornasetti : Taking a peek into the extensive works of the Italian artist

A look at the many faces of Fornasetti : Taking a peek into the extensive works of the Italian artist 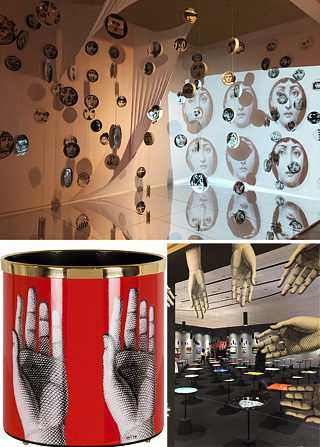 In Korea, Italian artist and designer Piero Fornasetti (1913-1988), is probably most recognized for a cushion - the so-called “Fornasetti Cusion.” This cushion, featuring a black and white print of a European woman’s face, has been one of the hottest items for ardent home decorators in Korea. The face of Italian opera singer Lina Cavalleri is in fact one of Fornasetti’s most iconic designs, and is featured on almost every product that Fornasetti has produced, ranging from coffee cups and plates to tables and umbrella stands.

But, Koreans will realize that there’s so much more to this Milanese artist than just the printed face at the “Fornasetti - Practical Madness” exhibition that recently kicked off at the Dongdaemun Design Plaza (DDP) in central Seoul on Tuesday.
As an artist who can’t be given just one job title, Fornasetti conceived and built about 13,000 objects over the course of his life, being a painter, printer, designer, collector, craftsman, gallerist and much more.
In 2013, marking the 100th anniversary of Fornasetti’s birth, his son, Barnaba Fornasetti, who’s dedicated his life to protect and “carry on the volcanic proliferation” of his father’s legacy, organized the exhibition by curating it himself, with the help of the Triennale Design Museum. Seeing an enthusiastic response from visitors, they decided to show it to a global audience, starting in Paris in 2015, at the Musee des Arts Decoratifs. After ending its run in Paris, the organizers picked Seoul as its next destination.
“During the Milano Design Week, we had an opportunity to see designs from Korea in detail,” said Arturo Dell’Acqua Bellavitis, president of the Triennale Design Museum. “And I remember that Korean designs really connect well - its traditional to modern designs. Since then, I began to think highly of Korean artists.”

“I also often visit China on business trips and witnessed there that everything that’s considered artistic and creative came from Korea. So Korea was always in our heads as the next destination. But honestly, we couldn’t skip Paris before coming here as it’s the most prestigious city when it comes to interior design and decor,” Bellavitis said.

Silvana Annicchiarico, director of the Triennale Design Museum, also added that they believe “Koreans are some of the few people who will really understand the work of Fornasetti and his artistic world as Koreans too have the so-called ‘intelligent hand’ from what I’ve seen.”

It is divided into distinct sections on different themes, starting from his professional life as an artist, then tracing his move into printing and showing the study of his intuitions and sensibilities for graphic design as well as his collaboration with renowned Italian architect Gio Ponti. The exhibit displays the head scarves that Fornasetti submitted for the Milan Triennale, leading to his connection to Ponti.

Variations on a theme is an evident characteristic of Fornasetti. The face of Cavalieri, which he found in a 19th century French magazine, for example, was transformed into different variations - numbering more than 350, says the organizers.

“Since my father’s works have been approached more as a commercial product, we didn’t really have opportunities to talk about his thoughts and the essence of his works,” said Barnaba Fornasetti. “My father’s works are not just creative and artistic designs, but has an artistic message embedded in each object. I wanted to share it with those who have the ability to understand.”