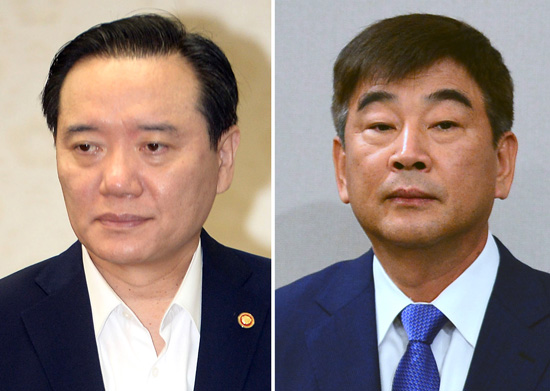 The minister of justice and the senior civil affairs presidential secretary tendered their resignations Wednesday, following an unprecedented clash between President Park Geun-hye and her own prosecutors over an investigation of abuse of power and their description of her as a “co-conspirator” in the case.

Presidential spokesman Jung Youn-kuk said Wednesday Justice Minister Kim Hyun-woong and Senior Civil Affairs Secretary Choi Jai-kyeong expressed their intentions to step down from their posts, but Park has yet to accept the resignations.

“Minister Kim believed this is the right thing to do, considering the circumstances,” the ministry said in a statement. “He tendered the resignation Monday.”

Kim was appointed to the post in July last year. Choi was appointed on Oct. 30 and received his credential on Nov. 18. He replaced Woo Byung-woo. Park resisted mounting pressures to fire Woo, accused of corruption, but let him go in the aftermath of the mushrooming abuse of power scandal.

The prosecution conducted a special investigation into a series of allegations that Choi Soon-sil, Park’s longtime friend, has strong-armed conglomerates to make massive donations to cultural and sports foundations and misappropriated the money to create slush funds. She was also suspected of having influenced state affairs by receiving confidential information from the Blue House.

On Sunday, prosecutors indicted Choi and a former Blue House aide over a wide range of charges including coercion. Another former presidential secretary was indicted on charges of leaking secret information to Choi. The prosecutors said Park was a co-conspirator in most of the crimes, but it could not press charges against her because of presidential immunity guaranteed in the Constitution.
But she can be prosecuted for those crimes after she leaves office.

Prosecutors summoned Park for questioning last week. She delayed. Following Sunday’s indictments, Park, through her lawyer and spokesman, questioned the integrity of the prosecutors and refused to cooperate with its plan to question her. The Blue House and the lawyer denied all charges, calling them a “house of cards” destined to collapse in a courtroom.