Over 90 percent of those polled want Park gone

Over 90 percent of those polled want Park gone 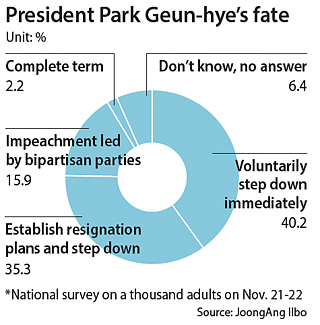 Over 90 percent of Korea thinks President Park Geun-hye should leave her office and 80 percent supports her impeachment, according to a recent poll by the JoongAng Ilbo.

The survey of one thousand adults was taken by telephone from Monday to Tuesday, as public ire toward Park and her longtime friend, Choi Soon-sil, is reaching new heights.

Only 2.2 percent said she should complete her five-year term, which ends in February 2018.

The rest did not give any answer, or said they did not know. As for whether they would approve of impeachment, 78.4 percent said they would, while 18.6 percent answered they would not.

In a separate poll of lawmakers from Park’s ruling Saenuri Party, 31 out of 112 respondents said they support impeaching the president, while 30 said they do not support the idea and 51 withheld from revealing their stance.

Under Article 65 of Korea’s Constitution, the National Assembly is granted the right to pass a motion for impeachment when the president has violated the Constitution or other laws in the performance of official duties.

A presidential impeachment requires a two-thirds vote by the 300-member National Assembly.

The three opposition parties and liberal independents occupy 171 seats. Support from rebels is crucial to pass the motion.

If the 31 Saenuri lawmakers who said they support impeachment vote in favor of the motion, then together with the 171 other votes, the motion will have two more than needed.

The latest polls come as Rep. Kim Moo-sung, a former Saenuri chairman who worked as chief campaign manager for Park in 2012, declared Wednesday he would “lead a discussion” inside the Saenuri Party to sponsor a motion for impeachment.