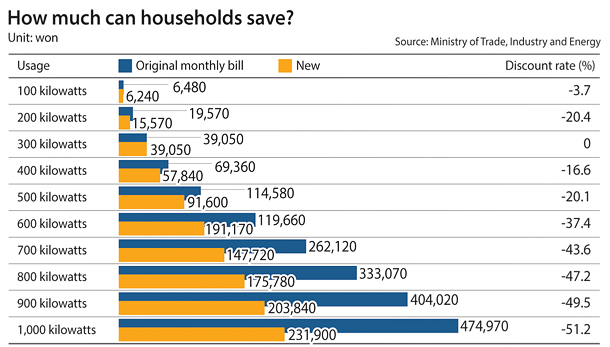 The government has proposed a new household electricity billing system to the National Assembly that could lower the average bill by 11.6 percent, and bills for heavy users by as much as 51 percent.

This is the first time in 12 years the government has revised the progressive billing system, which became a major issue this summer after a major heat wave led to monster power bills.

However, the new electricity system might be rejected by the assembly. Earlier, the Saenuri Party accepted the government proposal, but opposition parties - who control a majority in the legislature - are demanding more drastic changes that would reduce bills more.

The Ministry of Trade, Industry and Energy said Thursday that it has submitted three alternate sets of revisions to the billing system. The main change is to simplify six different ranges of electricity use to three.

Currently, there are six levels. Korean households pay 60.7 won (5 cents) per kilowatt of electricity for the first 100 kilowatts in a month. The price goes up to 125.9 won for the next 100 kilowatts per month and as high as 709.5 won per kilowatt - or 1,110.7 percent more than starting price - at the highest range.

The government plans to reduce the number of levels to three and the difference between the starting rate and the highest rate to 300 percent.

Among the three proposals, the ministry considers the third plan to have the highest chance of being chosen by lawmakers.

Korean households with four members consume an average of 366 kilowatts of electricity per month.

“The progressive billing system was introduced in 1974 in order to save energy, but we have come to agreement that the current system doesn’t reflect the changes in energy consumption and household incomes,” said an official at the Trade Ministry. “We also believe the gap between the lowest and highest energy bills was too big when compared to other developed countries. We will lower the rate significantly and will give more discounts to people in lower income groups.”

The Trade Ministry, however, said those who consume more than 1,000 kilowatts will have to pay 709.5 won per kilowatt, the highest rate in the current system, during the winter and summer seasons, when electricity consumption peaks.

As the new plans will, on average, lower power bills by 11.6 percent, the government estimated that the Korea Electric Power Corporation, the sole power distributor in the country, will likely see a drop of 939.3 billion won in its annual sales.

The government also announced that it plans to give more financial benefits to people in lower income groups and socially disadvantaged groups, such as the disabled, and large families.

“The government currently gives 8,000-won monthly discounts to the low-income groups but plans to double it to 16,000 won,” said the Trade Ministry.

The government said it will give 20,000-won discounts to low-income groups during the summer. Some 1.33 million households will be beneficiaries. The Trade Ministry added that there are more people using home appliances such as air conditioners compared to the past.

Families with large numbers of household members - more than three children - will enjoy up to 30 percent discounts on their electricity bills, up from 20 percent.

The Trade Ministry also plans to give discounts of up to 30 percent to families having their first child.

The progressive pricing system was established during the 1970s oil crisis to save energy for industries. Since then, there have been many attempts to change it, but not much progress was made.

On top of household electricity bills, the Trade Ministry announced that it will give cuts in power rates for schools. The ministry said it will give 15 percent to 20 percent cuts for elementary schools, middle schools and high schools.

The government is planning to hold a public hearing on the revised billing system on Monday and to finalize its plan by mid December.

Meanwhile, the opposition parties have been demanding that the billing system be changed in a way that the average electricity bill will be lowered by roughly 20 percent.

Developed countries like the United States and Japan also have progressive billing systems for household electricity - meaning heavy users pay more than light users - but the gap between the lowest and highest rates is only 101.4 percent.