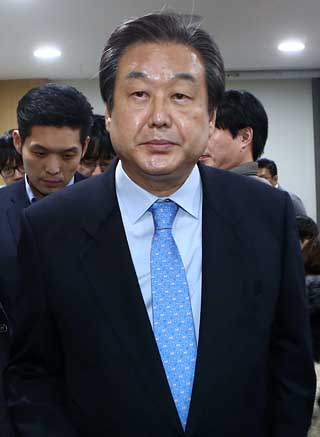 An initiative to reinvent the endangered conservative camp ahead of next year’s presidential election gained momentum on Thursday as Rep. Kim Moo-sung of the ruling Saenuri Party said he is willing to work with contenders outside his party.

The former Saenuri chairman had an interview with MBC radio in the morning and discussed the massive corruption scandal involving President Park Geun-hye and her friend, Choi Soon-sil.

On Wednesday, Kim held a press conference and vowed to start an initiative to impeach Park, whom he worked for during the 2012 race as chief campaign manager and supported as the ruling party chairman. He also said he will give up his presidential dream because he is ashamed of assisting her.

Following the announcement, Kim quickly redefined his position as a “kingmaker” for the next presidential election. Asked about the scope of the new conservative alliance he is planning to create, Kim said, “There will be no limit.”

He added, “I can hold hands with anyone who is not a member of the Moon Jae-in faction or Park Geun-hye faction.” Moon is a presidential frontrunner of the main opposition Minjoo Party of Korea who ran against Park in the 2012 election and was narrowly defeated.

He said UN Secretary General Ban Ki-moon could be a partner in his alliance. Ban, who will complete his tenure at the end of this year, said he will return and find a way to serve the country, but did not announce a presidential bid.

Park loyalists in the Saenuri Party have tried to recruit Ban, but it is unlikely that he will accept the invitation as the scandal involving Park has brought the party’s popularity to an all-time low.

Kim said, “Ban is an extremely great person and he should join a suitable political group, run in a primary and be selected by the people to pass the final test.”

When asked if he will work with Ahn Cheol-soo, the former chairman of the People’s Party and a major presidential contender, Kim said it is a possibility, noting, “All sensible, democratic minds, except for the two factions, must gather, find the strongest contender and throw in their support.”

“Ahn and Kim had a secret meeting early this month,” an Ahn associate recently told the JoongAng Ilbo. “Kim made several proposals to have a meeting open to the public, and we are having an internal discussion about the timing.”

The idea of finding a new political force outside the two factions, also known as “third way” politics, is backed by a constitutional amendment to introduce a new governing system to replace the current five-year, single-term presidency.

Minjoo Rep. Kim Chong-in, a strong advocate of a third way candidate, also supported Kim Moo-sung. Kim Chong-in is a political strategist who successfully led Park’s 2012 presidential campaign and then reinvented the main opposition party and engineered its April general election victory. Kim Chong-in said, “Kim Moo-sung made great remarks today. We need to wait and see, but after the impeachment process is over, we’ll need to have a discussion about the constitutional amendment.”

Others who have made similar proposals and are therefore likely to join Kim’s alliance include Sohn Hak-kyu, who left the Minjoo Party last month, and Gyeonggi Governor Nam Kyung-pil, who left the Saenuri Party on Monday. One People’s Party official recently said, “When the Park adversaries leave the Saenuri Party en masse, the initiative will gain further momentum.

The official added, “Ban is scheduled to return to Korea in mid-January and will be able to declare his political participation and join the move.”

In the survey, conducted on Monday and Tuesday, Moon was ranked first among presidential candidates with 21.5 percent, while Ban was ranked second with 18.1 percent.

Seongnam Mayor Lee Jae-myung was ranked the third with 10.1 percent and Ahn was ranked the fourth with 9 percent. Another 20.3 percent remain undecided.

This is a marked shift from the September poll, in which Ban scored 32.7 percent to top the list, while Moon was a distant second with 17.3 percent. Ahn scored 8.1 percent and Lee 2.7 percent at the time.

After the scandal broke, Lee, the first politician to argue for Park’s impeachment, enjoyed soaring popularity, while Ban’s popularity, due to the presumed association with Park and her loyalists, fell.

It was also clear that no Saeunuri candidates stand a handsome chance. Kim, who said he will not run, scored 2.3 percent, the highest among Saenuri members, while Rep. Yoo Seong-min scored 1.8 percent and former Seoul Mayor Oh Se-hoon 1.5 percent.

Overall, the Minjoo Party was supported by 30.3 percent, the Saenuri Party 13.2 percent, the People’s Party 11.5 percent and the Justice Party 7.1 percent.

“If the Saenuri Party fails to conclude the situation properly, the conservative voters will leave and support a centrist presidential candidate,” Yoon Hee-woong, director of the Opinion Live public opinion analysis center, told the JoongAng Ilbo. “Since the liberal supporters have already made up their minds, Ahn and similar candidates may try to form an alliance to absorb the votes.”